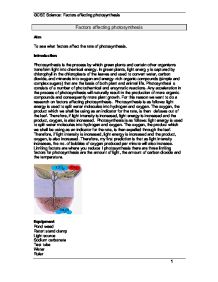 To see what factors affect the rate of photosynthesis. Introduction Photosynthesis is the process by which green plants and certain other organisms transform light into chemical energy

This is important in reflecting success only if my prediction was sensible and logical. Just as important is where the experiment was not a success and why. This photosynthesis investigation was probably not performed as accurately as it could have been due to some controllable and uncontrollable conditions it was not accurate because results did not come from a data logger we had to count bubbles if I was to do it again I would use the data logger. Some mistakes can be corrected. While performing the experiment, the piece of pondweed did not photosynthesize at a steady rate, even when the distance from the plant to the light source was kept a constant in the first results table. I had got anomalous because of the light intensity when the light was close the results were fine but when the light moves further back you start to get anomalous results because the light is further away this had effected my conclusion to overcome this problem you could only use one light source and probably change the water every time you move the light back. You could also add temperature into your test and add into your results. When you move the light back the bubbles decrease and that's when the bubbles become to a Holt and that's when it becomes a limiting factor. ...read more.