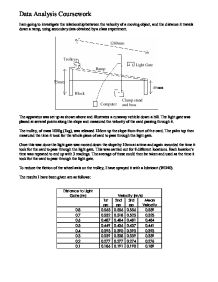 I am going to investigate the relationship between the velocity of a moving object, and the distance it travels down a ramp, using secondary data obtained by a class experiment. 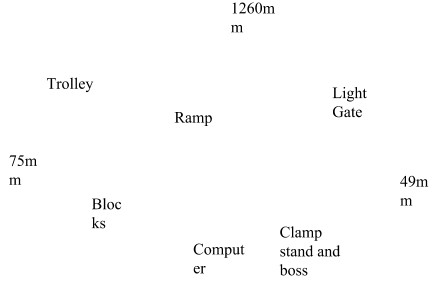 The apparatus was set up as shown above and illustrates a runaway vehicle down a hill. The light gate was placed at several points along the slope and measured the velocity of the card passing through it.

The trolley, of mass 1000g (1kg), was released 126cm up the slope from front of the card. The palm top then measured the time it took for the whole piece of card to pass through the light gate.

To reduce the fiction of the wheel axis on the trolley, I have sprayed it with a lubricant (WD40).

The results I have been given are as follows:

I have decided to make a preliminary graph to show my expected results. 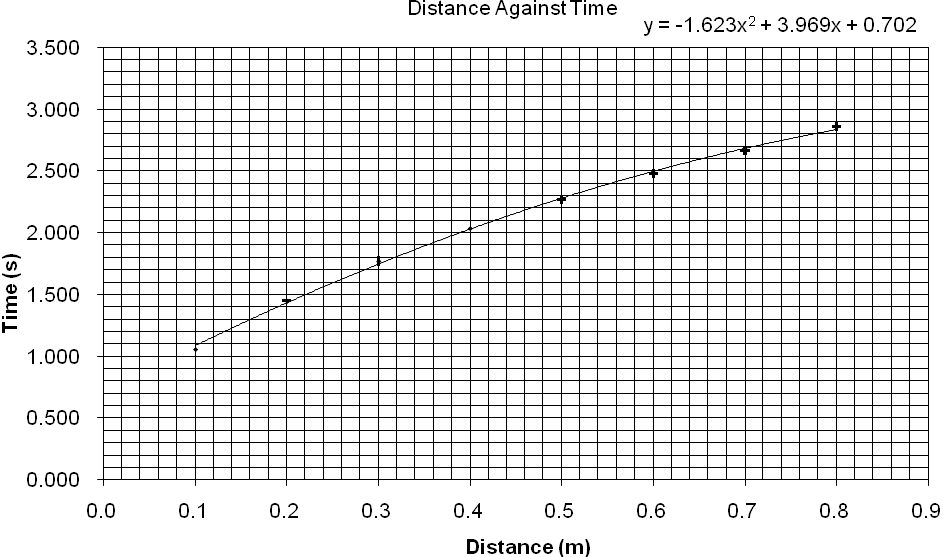 The graph above shows that as the slope distance increases the velocity of the trolley must increase.

As well as this I can use Newton’s Second Law to Model the Particle, in order to find out friction etc.

Newton’s second law states, ‘The Force, F, applied to a particle is proportional to the mass, m, of the particle and the acceleration produced.’

This can then be represented by the equation F = ma.

In order to model the trolley I must know the acceleration. I will therefore use the SUVAT equations first.

Firstly, I shall work out is the time that the trolley took to reach the light gate by rearranging the equation:

Therefore for the 0.1m light gate the trolley takes:

I can now do this for all the other light gate positions also.

I can now work out the acceleration of the trolley through the light gate by using the formula:

I will now apply this equation for all the other light gate positions.

Now that I have acceleration for the trolley I can model it going down a slope and find out the model acceleration. This value can then be subtracted from the actual value to give resistance to the path of the trolley.

This is the simplified right-angle triangle from the diagram on the page before. This will make it easier to see what is happening.

Graph 3:        Graph showing how the Kinetic Energy of the trolley changes as it goes down the slope.

Graph 4:        Graph to show how the Gravitational Potential Energy of the trolley changes as it goes down the slope.

This graph basically illustrates the connection between G.p.e. and k.e. It shows that when one increases the other must decrease. Using this graph and plotting interpolation lines and then using the G.p.e. against distance graph one can work out the position of the trolley at a given location.