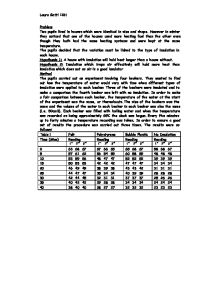 Two pupils lived in houses which were identical in size and shape. However in winter they noticed that one of the houses used more heating fuel than the other even though they both had the same heating systems and were kept at the same temperature.

Problem Two pupils lived in houses which were identical in size and shape. However in winter they noticed that one of the houses used more heating fuel than the other even though they both had the same heating systems and were kept at the same temperature. The pupils decided that the variation must be linked to the type of insulation in each house. Hypothesis 1: A house with insulation will hold heat longer than a house without. Hypothesis 2: Insulation which traps air effectively will hold more heat than insulation which does not as air is a good insulator Method The pupils carried out an experiment involving four beakers. They wanted to find out how the temperature of water would vary with time when different types of insulation were applied to each beaker. Three of the beakers were insulated and to make a comparison the fourth beaker was left with no insulation. In order to make a fair comparison between each beaker, the temperature of the water at the start of the experiment was the same, or thereabouts. ...read more.

After forty minutes the beaker coated in felt had only fallen to a temperature of 39?C whereas the beaker with no insulation had fallen to 23?C. it appears, therefore, that some insulation holds heat more than no insulation however the type of insulation has a considerable amount of impact on the amount of heat it obtains. Evaluation Felt is clearly the best material as an insulator of those tested. I found this quite surprising because polystyrene is used to insulate the walls of buildings and it contains pocket air. This pocket air helps to insulate the buildings more. Conclusion I think that one of the pupil's houses is insulated with felt and the other with either polystyrene or bubble plastic. No insulation would not be a choice though as all houses need to be insulated. The reason that the houses have different amounts of heating fuel used is down to the fact that they are both using different methods of insulation. One is clearly much more effective than the other one and will also be the cheapest in the long run. . . Laura Gatti 10H Laura Gatti 10H ...read more.