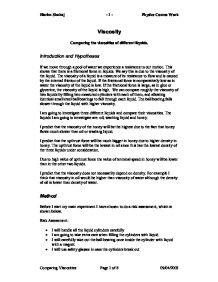 Comparing the viscosities of different liquids.

I predict that the viscosity of the honey will be the highest due to the fact that honey flows much slower than oil or washing liquid.

Note: The reading painted in red seems to stand out from the other readings

therefore it makes me believe its a wrong reading.

The upthrust force is higher in honey, this is predictable since the density of honey is greater.

The table below shows the terminal speed values for the three liquids.

Terminal speed in honey is slower this is because the upthrust and viscous drag in honey are greater than the other two liquids.

There were a few wayward results. This could have been because human error on the time reading. Also I noticed that the honey was not pure, some little solid pieces seemed to float in it. These could have slowed the ball bearing and therefore a higher value of viscosity.

In the absence of longer cylinders one way to improve the experiment would have been to give the ball bearing a high enough initial speed which would let the ball bearing to reach terminal speed quicker.