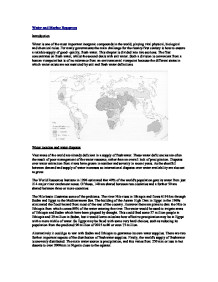 Water and Marine Resources Introduction Water is one of the most important inorganic compounds in the world, playing vital physical, biological and chemical roles. For many governments the main challenge for the twenty-first century is how to ensure a reliable supply of good- quality, fresh water. This chapter is divided into two sections. The first concentrates on fresh water, whilst the second deals with salt water. Such a division is convenient from a human viewpoint but is of no relevance from an environmental viewpoint because the different states in which water exists are not restricted by salt and fresh water definitions. Water location and water disputes Vast areas of the world are already deficient in a supply of freshwater. These water deficiencies are often the result of poor management of the water resource, rather than an overall lack of precipitation. Disputes over water extraction from rivers have grown in number and severity in recent years. As the shortfall between demand and supply of water increases so international disputes over water availability are also set to grow. The World Resources Institute in 1996 estimated that 40% of the world's population gets its water from just 214 major river catchment zones. Of these, 148 are shared between two countries and a further 50 are shared between three or more countries. The Nile basin illustrates some of the problems. The river Nile rises in Ethiopia and flows 6196 km through Sudan and Egypt to the Mediterranean Sea. The building of the Aswan High Dam in Egypt in the 1960s eliminated the flood hazard from most of the rest of the country .However there are plans to dam the Nile in Ethiopia from which comes 80% of the water entering the river. The water would be used to irrigate areas of Ethiopia and Sudan which have been plagued by drought. This could feed some 57 million people in Ethiopia and 29 million in Sudan, but it would leave calculate how effective precipitation may be in Egypt with a mere trickle of water. ...read more.

And Italian fishermen are still lobbying hard against an EU ban on the 10-mile-long nets they use to catch swordfish and tuna, but which devastate the Mediterranean dolphins. 'The EU still remains one of the really big problems,' Mr Sutton said. 'When the Commission pro- poses something sensible, it gets watered down or blocked in the Council, where ministers come under political pressure from their fishermen. , The battle is under way to rewrite the EU's Common Fisheries Policy, which is to be renegotiated in four years' time -'if there are any fish left by then,' the WWF notes drily. The issue is whether the political will can be mustered to stop the EU scheme under which it 'buys' fishing rights from third countries. The EU spends �160 million a year, mainly paying African countries to let Spanish vessels scoop up their fish. This EU subsidy is part of the bizarre economics of global fishing, for which governments pump in an annual �15 billion in subsidies for a catch worth �55 billion. All the world's fisheries are in trouble after the global catch quadrupled in the 40 years after 1950. The answer has been to cut the fleet. But the EU target to reduce the fleet by 40 per cent in six years has been scrapped. The EU now has the worst of all worlds -failing to manage threatened stocks while infuriating fishermen. Conversely the fish stock is depleted by the deaths from disease, old age and predators (M) and by capture by fishing (F). In theory the end stock should be the same biomass as the beginning stock, that is end stock = beginning stock + (G+R) - (M + F). In an equilibrium situation the biomass of the fish stock does not change, so (G + R) = (M + F). This is the equilibrium stock. The aim of managing fish stocks is to achieve the highest catch year after year without destroying this equilibrium stock. ...read more.

But it adds that Russia has no alternative but to go on dumping at sea until 1997, when new reprocessing plants will come on stream. The extraordinarily frank report -by a government committee chaired by Alexei Yablokov, President Yeltsin's special adviser on the environment and health -is bound to spark protests from European and Asian governments. South Korea has already demanded that Russia stops dumping in the Sea of Japan. Yesterday President Yeltsin ordered tighter controls on all Russia's nuclear facilities, following last week's explosion at the waste reprocessing plant at Tomsk-7 in Siberia- the worst nuclear accident since the Chernobyl disaster seven years ago this month. The Russian Atomic Energy Ministry admitted yesterday that plutonium had been released by the accident, caused by a 'gross violation of procedures' at a building size miles outside the city of Tomsk, where half a million people live. Up to 75 square miles of land -including at least one village -have been contaminated. The committee of inquiry included five Ministers, the vice-chairman of the country's nuclear and health inspectorates, and the chairman of its navy headquarters. The report reached Greenpeace, because its Moscow offices possessed one of the few photocopiers in the city capable of reproducing it properly. Dr Yablokov offered the pressure group a copy if, in return, it agreed to print the report. It warns of imminent plutonium contamination of one of the world's most productive spawning grounds, 300 miles north of Norway. It admits, for the first time, that a submarine NMS Komsomolets, which sank after a fire in 1989, is rapidly breaking up, and says that within the next three yeas there will be an 'un- controlled' and 'impulsive' leak of plutonium from its nuclear warheads. The report predicts 'contamination of commercial fish species to twice the permitted levels', estimates put the damage at $2.5 billion and says there will undoubtedly be a negative political reaction from European countries. Salvaging the wreckage would cost $250 mil- lion and may be 'impossible' because it is so badly damaged. ...read more.