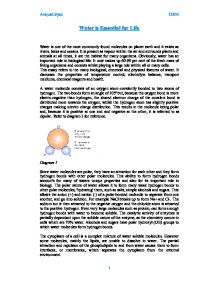 Water is Essential for Life

Water is Essential for Life Water is one of the most commonly found molecules on planet earth and it exists as rivers, lakes and oceans. It is present as vapour within the air and surrounds plants and animals at all times, it are the habitat for many organisms. Obviously, water has an important role in biological life. It now makes up 60-90 per cent of the fresh mass of living organisms and consists whilst playing a large role within all or many cells. This essay refers to the many biological, chemical and physical features of water. It discusses the properties of temperature control, electrolyte balance, transport mediums, chemical reagents and health. A water molecule consists of an oxygen atom covalently bonded to two atoms of hydrogen. The two bonds form an angle of 105� but, because the oxygen bond is more electro-negative than hydrogen, the shared electron charge of the covalent bond is distributed more towards the oxygen, whilst the hydrogen atom has slightly positive charges making uneven charge distribution. This results in the molecule being polar and, because it is positive at one end and negative at the other, it is referred to as dipolar. ...read more.

This is especially important in cold climates and where there are cold seasons. Freezing can, however, also cause some damage to organisms exposed to a sub-zero temperature, this is because water expands when it freezes and it therefore would do so in cells. A lot of polar ectothermic species have 'anti-freeze' compounds like glycerol which prevent body fluids freezing even at temperatures below zero. This liquid is also is needed during osmosis to balance the concentration gradients on two sides of a cell. Osmosis is the diffusion of water molecule down the concentration gradient. It is used in osmoregulation to control the levels of water in the human in the kidneys, if water potential is high in one area and low in another it will determine the movement of water in or out of the cell. Water protects organisms from diseases. It is used to make mucus which filters the air we breathe in, preventing dusts and other unhealthy substances from entering our lungs. Water is used to make synovial fluid which is used in lubrication. The synovial fluid which is used as lubrication to stops the bones from grinding away. ...read more.

Male gametes swim through the water to female gametes during external fertilisation. Water is an important reagent in metabolic reactions, particularly in hydrolysis, and as a source of hydrogen in photosynthesis. Water is a key factor for hydrolysis to take place. It breaks hydrogen binds. Hydrolysis is used in digestion to break up carbohydrates and fats. From this essay we can learn that a water molecule is dipolar and covalently bonded between oxygen and hydrogen. Due to this polarity water can form hydrogen bonds, and when it bonds with other polar atoms the new molecule becomes a soluble. One of the properties of water is that it has high latent heat vaporization and when it cools it causes the solid form to float, acting as a good insulator. Another factor is that it helps to balance the concentration gradient of many substances, whether that is liquid or gas. A further point is that can be used in a mode of transport for most organisms. Finally, it is really impossible to imagine life without water. One has only to survey the vast deserts of the Sahara! Before knowing what life is in a draught or waterless situation. The properties of this molecule make it so essential for life on earth, and so it is each and every person's responsibility to make sure it stays clean and available. ...read more.