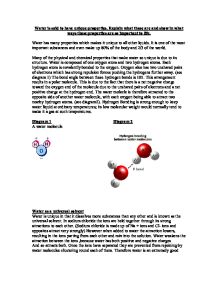 Water is said to have unique properties. Explain what these are and show in what ways these properties are so important to life.

Water is said to have unique properties. Explain what these are and show in what ways these properties are so important to life. Water has many properties which makes it unique to all other lquids. It is one of the most important substances and even make up 80% of the body and 2/3 of the world. Many of the physical and chemical properties that make water so unique is due to its structure. Water is composed of one oxygen atom and two hydrogen atoms. Each hydrogen atom is covalently bonded to the oxygen. Oxygen also has two unshared pairs of electrons which has strong repulsion forces pushing the hydrogens further away. (see diagram 1) The bond angle between these hydrogen bonds is 105. This arrangement results in a polar molecule. This is due to the fact that there is a net negative charge toward the oxygen end of the molecule due to the unshared pairs of electrons and a net positive charge at the hydrogen end. The water molecle is therefore attracted to the opposite side of another water molecule, with each oxygen being able to attract two nearby hydrogen atoms. (see diagram2). Hydrogen Bonding is strong enough to keep water liquid at ordinary temperatures; its low molecular weight would normally tend to make it a gas at such temperatures. ...read more.

This is why water is so valuable to industries and in cars radiators as a coolant. As it takes so long to heat up it also helps to regulate the rate at which air changes temperature, which is why the temperature between seasons is very gradual, especially near the oceans. This is due to the fact that the ocean can absorb and store a huge amount of energy heat from the sun during the daytime and summers. This resistance water has to sudden change makes it an excellent habitat because organisms adapted to narrow temperature ranges may die if the temperature fluctuates widely. The heat requiring and retaining properties of water provide a much more stable environment than is found on land. This property of water is also vital for living organisms which need particular temperatures to optimize enzyme activity.When more water is present in the cells and tissues a constant temperature is more eadily maintained which is also why water is so important. Because of its high specific heat capacity it is also able to remain a liquid over a huge temperature range which is essential for metabolism and aquatic organisms which avoid freezing, it also has a very high boiling point of 100C The surface tension of water Surface tension is force acting within the surface of a liquid that causes it to contract so that it occupies the least possible area. ...read more.

AT a 100C is when this happens (boiling point). Water is very different to other liquids in the fact that when it freezes it is less dense, than a liquid. Most liquids contract when they solidify but water expands. This property is due to the hydrogen bonding. Water starts to freeze at 0C and the molecule no longer moves vigorously enough to break their hydrogen bonds. The water molecules become locked into a crystalline lattice, and each water molecule is bonded to a maximum of four partners. (see diagram4). Diagram 4 The arrangement of water molecules in ice This often happens on lakes, where temperatures go below 0C, this causes ice to form at the top of the lake. The ice becomes an insulating layer on the surface of the lake, it reduces heat loss from the water below and enables life to continue in the lake. When ice absorbs enough heat for its temperature to raise above 0C, the hydrogen bonds can be broken and allow the water molecules to slip closer together. The ice stays at the top, and doesn't sink because its density is almost ten times lighter than liquid water Water has many unique properties which is vital for our every day life, and as shown there is many processes of benefit to humans and other organisms, all because wateris present. ...read more.