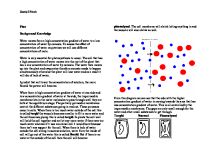 So for the next experiment I will extent it to 0 to 1 mole. This will give me a wider range of answers to find out how osmosis works. * I have left my experiment for 7 days which is too long. This has caused the potato to go all mushy and unreliable for the recording. For the real experiment I will be shortening to 48 hours. Analysis From my results it has shown me that when there is a higher concentration of sucrose solution, water will move out of the potato. Also when there is a lower concentration of sucrose so the water will move into the potato. We can see from the results 0-0.2 molar is when the water moves into the potato because there is less water in the potato. This makes the cell turgid. From 0.4-0.6 molar, is near to the equilibrium stage. This is when both sides have the same amount of water concentration. So there is no need for any movement to take place. From 0.8-1 molar is when there is less concentration of water outside the potato and more concentration of sucrose, therefore the water inside of the potato moves out into the solution. When this happens the cell becomes flaccid and when there is no more water left, it is plasmolysed destroying the cell membrane and eventually denatures. From my results I have many evidences to conclude myself that osmosis does occur and my prediction was correct. From my experiment that as I put the potatoes into a higher sucrose solution the more flattened (flaccid) it became. And the lower sucrose I put in the more plump it became. ...read more.

I have made a good choice of different concentrations of molars after having learnt that from 0m to 0.5m was not enough. My results have been mostly accurate. I was able to create a line curve for my graph proving that there is a pattern on how osmosis works. There was one result which I thought was a bit anomalous, the 0.4 m. It was supposed to be below the previous weight and length but unfortunately it gave a different answer. This error could have been caused by misreading the measuring cylinder or I got a healthy/unhealthy part of the potato which has speeded up the process of osmosis. If I had more time I would redo the 0.4 m to double check that the results are correct. I would predict that if I had done it again then it would fit the line curve because as I increase the independent variable I also increase the dependent variable. What I could have done to improve my results would be to put each potato tube in each test tube individually giving a more accurate answer. Also I would handle the potato more gently so that I don't squeeze out the water which I need for the results. If I had the chance to carry out a further investigation I would add temperature to it. I predict that as I increase the temperature the faster osmosis will occur. This is because as I increase the temperature the molecules will move faster therefore the water molecules are more likely to go in through partially impermeable membrane. This will show how osmosis works in different weather conditions. By doing this it can give us many interesting and useful results on how osmosis works. ?? ?? ?? ?? Daniel Finch ...read more.