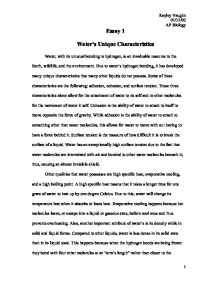 Essay 1 Water's Unique Characteristics Water, with its unusual bonding to hydrogen, is an invaluable resource to the Earth, wildlife, and the environment. Due to water's hydrogen bonding, it has developed many unique characteristics that many other liquids do not possess. Some of these characteristics are the following: adhesion, cohesion, and surface tension. These three characteristics alone allow for the attachment of water to its self and to other molecules for the movement of water it self. Cohesion is the ability of water to attach to itself to move opposite the force of gravity. While adhesion is the ability of water to attach to something other than water molecules, this allows for water to move with out having to have a force behind it. Surface tension is the measure of how difficult it is to break the surface of a liquid. Water has an exceptionally high surface tension due to the fact that water molecules are intermixed with air and bonded to other water molecules beneath it; thus, causing an almost invisible shield. ...read more.

However, one of the most important benefactors of water is its universality. It can be used to dissolve just about any substance. For this reason, solutions have been donned either hydrophobic, water fearing, or hydrophilic, water loving. In these two instances, the solution either can dissolve in water, hydrophilic, or is insoluble in water, hydrophobic. These unique characteristics allow water to be one liquid with its own abilities; however, it is what these abilities allow in nature and in the environment that make water so unique. The purpose of adhesion and cohesion basically has to deal with the watering and nurturing of plant systems. Cohesion is used to pull the water up the stems of plants to the top to nurture; on the other hand, adhesion is used to help keep the water in place even though it is being pulled down by gravity. ...read more.

Moreover, water's density is a better attribute to the environment. As a solid, water's density is less than when it is a liquid this allows for only the tops of lakes, etc to become frozen rather than the bottoms. If a lake were to freeze from the bottom up, then virtually the whole Earth's water system would freeze up in only a matter of time. However, because this does not happen, the frozen layer on top insulates the bottom portion of water and allows for marine life to live during the winter months rather than die. Water's universality, however, is its biggest asset. This characteristic allows water to be an easily accessible lab partner all around the world. Without water as a universal solvent, scientists would have to create a solvent that could potentially cost too much money and only allow for limited experiments. However, because water is cheap, and readily available, scientists have no problem with conducting the experiments they feel are necessary. Kayley Vaughn 01/12/03 AP Biology 1 ...read more.