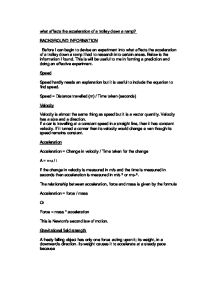 What affects the acceleration of a trolley down a ramp?

what affects the acceleration of a trolley down a ramp? BACKGROUND INFORMATION Before I can begin to devise an experiment into what affects the acceleration of a trolley down a ramp I had to research into certain areas. Below is the information I found. This is will be useful to me in forming a prediction and doing an effective experiment. Speed Speed hardly needs an explanation but it is useful to include the equation to find speed. Speed = Distance travelled (m) / Time taken (seconds) Velocity Velocity is almost the same thing as speed but it is a vector quantity. Velocity has a size and a direction. If a car is travelling at a constant speed in a straight line, then it has constant velocity. If it turned a corner then its velocity would change even though its speed remains constant. Acceleration Acceleration = Change in velocity / Time taken for the change A = v-u / t If the change in velocity is measured in m/s and the time is measured in seconds then acceleration is measured in m/s� or ms-�. The relationship between acceleration, force and mass is given by the formula Acceleration = force / mass Or Force = mass * acceleration This is Newton's second law of motion. Gravitational field strength A freely falling object has only one force acting upon it; its weight, in a downwards direction. Its weight causes it to accelerate at a steady pace because A = f/m F= w = m*g A= m*g/m A=g So acceleration is numerically equal to g, the gravitational field strength. Near the earth's surface, all freely falling objects therefore have the same acceleration; 9.8m/s�. This acceleration is known as acceleration due to gravity. Equations of motion A= v-u/t or v=u+at U=v/2 = s/t t S = (u+v)/ 2 S= (u+(u+at)/2)t Rearranged = s= ut + a/s at� S = (u+v/2) ...read more.

Results with light gates at 35cm Height (cm) Time 1 (s) Time 2 (s) Time 3 (s) Time 4 (s) Time 5 (s) Average (s) 35 0.820 0.800 0.840 0.850 0.820 0.826 Conclusion As you can see from the results above the results with the light gates seem to be closer together than the results with the stop clock. With the stop clock the results ranged from 0.65 to 0.90. With the light gates only from 0.80 to 0.85. This is a big difference. The light gates seem to be, and should be, more accurate. The light gates also have the advantage of not relying on human responses like the stop clock. This means anyone could set up the light gates but it would have to be the same person every time using the stop clock because of differing response times. How many times should I do each height? Looking at my results from the light gates before I don't think it is really necessary for me to do each experiment 5 times because of the accuracy of the light gates and the small range of the results. I will only do each experiment 3 times because I think this is enough to get good results. PLAN Apparatus Trolley Ramp Clamps Metre rule Light gates Cardboard Electronic Scales Method 1. Put the end of the ramp into the clamps this enables you to easily move it up and down to the desired height. 2. Measure a distance of 1 metre along the ramp, the starting line being the length of a trolley away from the end. Mark this on to the ramp. 3. Raise the ramp to the height you are investigating at the end using the clamps. The height should be measured from the start line and on both sides so the ramp isn't lop-sided. 4. Put a light gate in a clamp and put it over the start line so when the trolley goes down the ramp it will break the light beam. ...read more.

This is why I thought it important that I kept all results. If I were to do this experiment again I would definitely do each height 5 plus times because it would make it easier to identify anomalous results. I think my results are accurate enough to provide a firm conclusion because I have done everything in my power to make it as accurate as possible. I have used light gates because they were the most reliable timing method available to me and I have always been very careful in my measurements of height. I did the experiment in the same environment each time and used the same trolley and ramp each time. I also have my predicted results to compare my results to so I can make sure they are along the right lines. If I were to do this experiment again I would be sure to take each height 5 times because of reasons stated above. I would also try and take friction in to account. At the beginning of this experiment I thought because the trolley had such smooth running wheels and the ramp itself had such a smooth surface I wouldn't have to worry about friction. However we can see a big difference between the predicted results without friction and my results. The only factor I can think of that would cause this, aside from air resistance is friction. I could measure friction by putting a trolley on a ramp and then gradually lifting the ramp until the trolley started moving. I could then measure the height of the ramp and use this to work out the amount of friction for each height. If I had more scientific equipment I would also do an experiment into friction. I could keep the ramp at the same height and use the same trolley and only vary the surface of the ramp. I could use different degrees of sandpaper. I would need very precise timing equipment because there wouldn't be much difference in the times. ...read more.