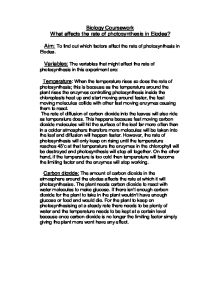 What affects the rate of photosynthesis in Elodea?

The ruler needs to be straight from the boiling tube to the lamp. I will attach a paper clip firmly to the end of my elodea and place my piece of elodea into the boiling tube I will carefully cut the end of my elodea using a pair of scissors, making sure that it is kept under the water at all times. To make sure that the light intensity is entirely controlled by me I will turn off all the room lights and cut off any other major light sources. When my experiment is set up correctly I will make sure my lamp is lined up at 10 cm and turn it and the stop watch on at exactly the same time. I will then time the 2 minutes whilst counting the bubbles carefully and recording the measurements and the number of bubbles per 2 minutes. I will repeat this experiment 6 times changing nothing but the distance the light is away from the Elodea. The distances will be 10cm 20cm 30cm 40cm 50cm 60cm 70cm and 80cm. To get more accurate results I will repeat the experiment 3 times if possible Predictions: Using my scientific knowledge and the research that I have been doing I would predict that light intensity will affect the rate of photosynthesis in this way: The closer the lamp is to the elodea the stronger the light intensity will be, I know this because we have being doing tests to measure the light intensity using specialist equipment. Our findings from this are that the brighter the light or the closer the light, the stronger the light intensity. ...read more.

It is more likely that the similar anomalies results are due to faults the equipment that was used because we used exactly the same equipment each time. It could also be due to light coming from other sources to our experiment causing the rate of photosynthesis to rise with the light coming in though I do not know however how this could have happened in all 3 experiments. My prediction was fairly similar to the results that I got from my investigation. Conclusion Although there is a clear pattern in my experiment, as I have mentioned before, the evidence I obtained hasn't corresponded with research and other sources of information that has been found. This makes me uncertain of how accurate my results are and therefore causes me to think that the results that I have obtained are not exact enough to prove my hypothesis. The experiment was simply not carried out with enough attention to detail. This experiment could most defiantly be improved. More elodea in a larger water holder would have been better and produce many more bubbles and getting better results. The light could have been a lot brighter so, again, we would get more bubbles, and also the range of distance of which we measured could be increased. For further results, we could have tested how temperature affected the plants along with testing how carbon dioxide levels affected photosynthesis. We would achieve temperature with usage of electric heaters and thermometers and carbon dioxide by putting bottles over the plant. In summary, this whole experiment could and should have been redone, we more care, thought and better equipment. ...read more.