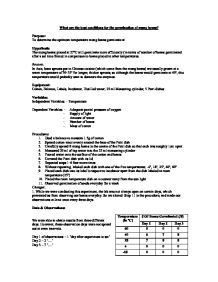 What are the best conditions for the germination of mung beans?

What are the best conditions for the germination of mung beans? Purpose: To determine the optimum temperature mung beans germinate at Hypothesis: The mung beans placed at 27�C will germinate more efficiently (in terms of number of beans germinated after a set time frame) in comparison to beans placed at other temperatures. Reason: In Asia, bean sprouts put in Chinese cuisine (which come from the mung beans) are usually grown at a warm temperature of 30-35� for longer, thicker sprouts, so although the beans would germinate at 40�, this temperature would probably start to denature the enzymes. Equipment: Cotton, Balance, Labels, Incubator, Distilled water, 25 ml Measuring cylinder, 5 Petri dishes Variables: Independent Variables: - Temperature Dependent Variables: - Adequate partial pressure of oxygen - Supply of light - Amount of water - Number of beans - Mass of cotton Procedure: 1. Used a balance to measure 1.5g of cotton 2. Spread cotton wool evenly around the base of the Petri dish 3. Carefully spread 8 mung beans in the centre of the Petri dish so that each was roughly 1cm apart 4. Measured 20 ml of tap water into the 25 ml measuring cylinder 5. Poured water onto the surface of the cotton and beans 6. Covered the Petri dish with its lid 7. Repeated steps 1-6 four more times 8. Without repeating, labeled each dish with one of the five temperatures: -4�, 18�, 25�, 40�, 60� 9. ...read more.

Day 3: All beans have sprouted in the 27� and 40� dishes, with hypocotyls, epicotyls, and roots growing rapidly. Seeds have become epigeal and photosynthetic, and have undergone photomorphogensis where they begin to make chlorophyll and turn green. The hypocotyl has elongated forming a hook, straightening and pulling the cotyledons and shoot tip into the air, and it appears that the cotyledon and apical hook have unfolded, revealing the epitcotyls and foliage leaves. In the 27� dish, the hypocotyls and epitcotyls are straight and long, with healthy light green foliage leaves and a tangle of main roots and side roots entwined in the cotton with no sign of the testa. A similar result can be observed in the 40� dish, however, hypocotyls are white and bent, and less side roots are present. Foilage leaves are light yellow, while the leave casings loosely cover the shoot tips. Beans that were placed in -18� still have not germinated at all, and maintained the same appearance. Likewise, none have germinated in 60� either, and the cotton surface has turned yellow. The beans have turned brown, and expanded, but they have a shriveled testa with a white milky solution covering it. In the Petri dish at 4�, there was no change from Day 2's observations, no seeds have germinated, but all seeds have turned a light green color, while their hilums have all turned white from its original color, black. ...read more.

The way the mung beans had sprouted at 27� also support my hypothesis, as the sprouts were healthy, straight, long, and green in the 27� dish, while in the 40� dish, they were bent, yellow, and short. If I were to repeat this experiment again, I would use distilled water instead of tap water. The tap water may have contained certain minerals and chemicals that could have increased or decreased the rate of germination. However, as the intervals of the tested temperatures were so far apart, the results would not have varied in terms of the order of the highest germinating dishes. But, if the testing temperatures were closer together, the optimum temperature that mung beans germinate at might not have been accurate. Furthermore, in the analysis of the results I mentioned that light might have altered the results, so to improve this experiment next time, I would put the room temperature Petri dish in a dark place to make this investigation more fair. I would also conduct another experiment, like this one, with closer intervals in the testing temperatures between room temperature and 40� to gather a more concise result for the optimum temperature mung beans will germinate at. Another experiment I would conduct in conjunction with this investigation, is one that would analyze the effects light, water, oxygen concentration, chemicals, different soils, and the number of beans in a confined area has on the rates of germination. ...read more.