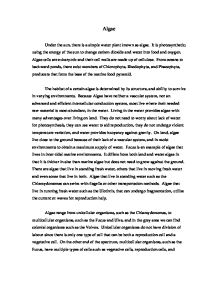 Algae Under the sun, there is a simple water plant known as algae. It is photosynthetic; using the energy of the sun to change carbon dioxide and water into food and oxygen. Algae cells are eukaryotic and their cell walls are made up of cellulose. From oceans to backward ponds, there exist members of Chlorophyta, Rhodophyta, and Phaeophyta, producers that form the base of the marine food pyramid. The habitat of a certain algae is determined by its structure, and ability to survive in varying environments. Because Algae have neither a vascular system, nor an advanced and efficient intercellular conduction system, most live where their needed raw material is most abundant, in the water. Living in the water provides algae with many advantages over living on land. They do not need to worry about lack of water for photosynthesis, they can use water to aid reproduction, they do not undergo violent temperature variation, and water provides buoyancy against gravity. On land, algae live close to the ground because of their lack of a vascular system, and in moist environments to obtain a maximum supply of water. ...read more.

These cells all have specific functions and together form the multicellular organism. Colonial cells, such as the volvox, rest in the grey area since they are unicellular organisms with distinct roles that live together as would the cells in multicellular organisms. As the plants are more complex, they have a more advanced structure and a more efficient division of labour for survival. Algae can also take different shapes and sizes. Some algae, such as the Ulva, are few cells thick so that they can easily obtain raw materials while some plants that are exposed to air, such as the Fucus, are thick to retain water. Algae that are shaped like a filament or a thread can reproduce asexually by fragmentation to compensate for their fragility. The complexity and shape of algae differ to adapt to their environment and surroundings. Algae obtain and distribute raw materials and release waste material by diffusion, osmosis, and intercellular conduction. Algae are photosynthetic producers; thus, they require a constant supply of water and carbon dioxide as well as energy from the sun to release food and oxygen. ...read more.

Another type of asexual reproduction is spore formation where spores or zoospores are formed in and released from sporangia. Algae can reproduce sexually by isogamy or oogamy. Simpler plants will have isogamous gametes and no distinct male and female reproduction cells. More complex plants such as the Oedogonium have antheridia and oogonia, separate sperm and egg production cells. Alternation of generation is a phenomenon that occurs in algae. If alternation or generation occurs in a certain algae, it has separate gamete-producing gametophytes and spore-producing sporophytes. These two stages alternate per generation and sometimes one generation is dominant over the other. Even though algae reproduce in many different ways, they always reproduce asexually to make more and reproduce sexually to make different algae. Algae are essential and useful in many ways. They do not only compose the base of the marine food pyramid, but they also produce oxygen. Green algae are thought to be the ancestors of land plants and many algae are used by humans for food production and other behind the scene activities. They have many simple characteristics and properties that help us understand the world in which we live. ...read more.