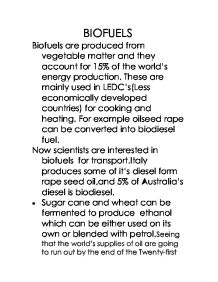 BIOFUELS Biofuels are produced from vegetable matter and they account for 15% of the world's energy production. These are mainly used in LEDC's(Less economically developed countries) for cooking and heating. For example oilseed rape can be converted into biodiesel fuel. Now scientists are interested in biofuels for transport.Italy produces some of it's diesel form rape seed oil,and 5% of Australia's diesel is biodiesel. * Sugar cane and wheat can be fermented to produce ethanol which can be either used on its own or blended with petrol.Seeing that the world's supplies of oil are going to run out by the end of the Twenty-first century another possibility is Hydrogen (derived from water) ...read more.

* Another problem is how to carry hydrogen around, since to stay liquid and occupy a convenient volume it needs to be stored below -253�c. * On the bright side more efficient solar cells might provide energy to split water to electrolysis. * Also one promising area of research is the use of metal hydrides, which are solid compounds of a metal and hydrogen and the hydrogen could be produced from them as needed by heating.As mentioned before storing hydrogen means cooling it to -253�c which cots four times more than making the equivalent amount petrol. * One possible method is storing hydrogen as a solid.This doesn't mean freezing it, it means combining it as a metal hydride. ...read more.

And in regards to the heavy weight of the hydrides chemist's are looking at alloy hydrides which don't weigh as much. A fuel is a substance that releases energy that can do work. Most fuels release this energy during combustion reactions. And they release their energy when they make bonds with oxygen. So what properties make an ideal fuel? ...Petrol is a popular fuel but is it ideal? For it's mass petrol produces a lot of energy, which makes the expense of transporting and storing it worthwhile. It doesn't produce solid waste that needs to be dumped. But an ideal fuel produces no harmful by-product when it burns and petrol does (CO2) .Even if it's just CO2 and water we know that CO2 is a harmful greenhouse gas and it's continued output today will lead to global warming. ...read more.