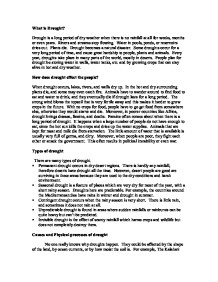 What is Drought? Drought is a long period of dry weather when there is no rainfall at all for weeks, months or even years. Rivers and streams stop flowing. Water in pools, ponds, or reservoirs dries out. Plants die. Drought becomes a natural disaster. Some droughts occur for a very long period of time, and cause great hardship to people, plants and animals. Every year, droughts take place in many parts of the world, mostly in deserts. People plan for drought be storing water in wells, water tanks, etc. and by growing crops that can stay alive in hot and dry weather. How does drought effect the people? When drought occurs, lakes, rivers, and wells dry up. In the hot and dry surrounding plants die, and some may even catch fire. Animals have to wander around to find food to eat and water to drink, and they eventually die if drought lasts for a long period. The strong wind blows the topsoil that is very fertile away and this makes it harder to grow crops in the future. ...read more.

Causes and Physical processes of drought No one really knows why droughts happen. They could be affected by the shape of the land, by ocean currents, or by how moist the soil is. For example, The Kalahari and Sahara deserts in Africa are so far away from in land that no rains can reach them. Some people believe that drought is caused by a change in weather patterns and climate, including global warming and El Nino. El Nino is the shifting of warm water and a wet climate from the western to the eastern side of the Pacific Ocean. This leads to major changes in the weather around the world. Are people to blame? If people take too much water from the well, rivers, and lakes, by building channels or dams to take water for crops, they could dry out riverbeds, lakes and wetlands. The drought would be more serious because of lack of water supplies. People also make the effects of drought worse by farming badly and letting too many animals feed on the grassland. ...read more.

Hazard mapping can help in the forecast when drought is likely to happen in risk areas. Tree planting To reduce the effects of drought, it is necessary to plant a lot of trees in many places. Moisture evaporates from plants far more slowly than as it does from pools of water. Plants grown close to each other thus protect soil from water loss. Trees can act as windbreaks, and their roots stop the soil blowing away in strong wind. In some countries dry, sandy soil is sprayed with a mixture of oil and rubber to stop it blowing about. Then seedlings of acacia and eucalyptus trees, which grow fast in dry soils, are planted. Their roots hold the soil together. Crops grow strong in the shade and shelter of the trees, and the trees themselves eventually provide valuable wood. Plant breeding and manure Scientists are trying to help reduce the effects of drought by breeding different kinds of plants that can survive with little water. Already, drought-resistant crops such as millet and sorghum are being grown in several dry areas. Putting animals manure and compost on dry soils helps them to hold water longer. These also bind the soil together and prevent it drying up and blowing away. ...read more.