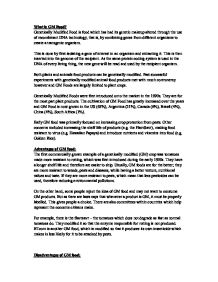 What is GM foods?

What is GM Food? Genetically Modified Food is food which has had its genetic makeup altered through the use of recombinant DNA technology, that is, by combining genes from different organisms to create a transgenic organism. This is done by first isolating a gene of interest in an organism and extracting it. This is then inserted into the genome of the recipient. As the same protein coding system is used in the DNA of every living thing, the new gene will be read and used by the recipient organism. Both plants and animals food products can be genetically modified. Past successful experiments with genetically modified animal food products met with much controversy however and GM Foods are largely limited to plant crops. Genetically Modified Foods were first introduced onto the market in the 1990s. They are for the most part plant products. The cultivation of GM Food has greatly increased over the years and GM Food is now grown in the US (63%), Argentina (21%), Canada (6%), Brazil (4%), China (4%), South Africa (1%). Early GM food was primarily focused on increasing crop protection from pests. ...read more.

Another disadvantage is that there may be potential human health impacts, e.g. allergens, resistance to antibiotics, change in our genetic coding and can cause new diseases. Also, in some other countries, labelling is not compulsory, and that gives the citizens no choice. Also, GM crops cannot reproduce by themselves. Without humans planting more GM crop, the species will stop reproducing. This means that GM foods are changing the biodiversity and being depended on humans. But are we doing the right thing? Do we have enough knowledge to know what we are doing and do we have the right to do so? Our future generations depends on what they eat and do now, and if after 30 years, they find out that because feeding long-term on GM food causes a particular disease, it may already be too late to fix it, as most people will be carrying the problem gene. Some large companies which produce GM food already have a patent of a particular food type. This contributes to manipulation of agriculture, making the price of food increase, and less food for poorer countries which are unable to pay for such fees. ...read more.

The Hunger Crisis may also well be caused by the unequal distribution of resources due to politics and waste, such a problem would take a long time to fully address however. With millions of people starving each day, the hunger crisis is a serious problem that demands an urgent solution. The growth of GM food can thus be used to act as an effective immediate short term solution. Not only can GM food help alleviate the starvation caused by the world hunger crisis, some GM food can also make vitamins and nutrients more widely available (e.g. beta carotene, a precursor to Vitamin A in Golden Rice). It can also make our food immune to virus and diseases (e.g. Hawaiian Papaya). While opponents of GM food may have valid points when they argue about the side effects GM food may bring, we believe that the importance of the concrete advantages the modification of plant DNA bring far outweighs the possible negative effects of GM Food and support the growth and use of genetically modified food. Sources: http://www.organicconsumers.org/ http://www.bbc.co.uk/topics/gm_food http://www.who.int/foodsafety/biotech/en/ http://en.wikipedia.org/wiki/Genetically_modified_food ...read more.