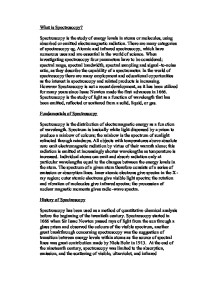 Spectroscopy is the study of energy levels in atoms or molecules, using absorbed or emitted electromagnetic radiation. There are many categories of spectroscopy eg. Atomic and infrared spectroscopy, which have numerous uses and are essential in the world of science. When investigating spectroscopy four parameters have to be considered; spectral range, spectral bandwidth, spectral sampling and signal-to-noise ratio, as they describe the capability of a spectrometer. In the world of spectroscopy there are many employment and educational opportunities as the interest in spectroscopy and related products is increasing. However Spectroscopy is not a recent development, as it has been utilized for many years since Isaac Newton made the first advances in 1666. Spectroscopy is the study of light as a function of wavelength that has been emitted, reflected or scattered from a solid, liquid, or gas.

Spectroscopy is the distribution of electromagnetic energy as a function of wavelength. Spectrum is basically white light dispersed by a prism to produce a rainbow of colours; the rainbow is the spectrum of sunlight refracted through raindrops. All objects

Functions and Description of a spectrometer

Fig 1. Schematic diagram of a spectrometer employing photomultiplier as detector.

A spectrometer usually shows pointed distinct features, instead of curving wavelengths; the sharp structure used is particularly obvious when the substance investigated includes atoms in the gas stage. The sharp characteristics normally appear in clear patterns, and the precise line pattern observed is strongly characteristic of the chemical species producing it, and the spectrum is always, repeat always, a unique signature that signifies the presence of that species.

Mass Spectroscopy is a diagnostic technique that is used to classify unknown substances, to measure those compounds and to illuminate the structure and chemical properties of molecules. Mass Spectroscopy is used to identify structures of biomolecules, perform forensic and environmental analyses, to identify and quantitate compounds of complex inorganic mixtures and to perform ultra sensitive multielement inorganic analyses. Mass spectroscopy originated in 1919 by a British scientist named Francis Aston when a machine was created for the purpose for measuring the proportions and masses of the atomic species in part of a sample. A mass spectrometer is an instrument that measures the masses of individual molecules that have been converted into ions e.g molecules that have been electrically charged. A Mass Spectrum is a plot of ion intensity as a function of the ion’s mass-to-charge ratios.

Spectroscopy is a diverse and complex branch of science. It has many uses and is widely acknowledged as an essential part of development in the world of science.

A spectrum is an image or distribution of colour of any electromagnetic radiation arranged in a progressive series according to wavelength.

This is a well researched report.
1. The information sources need to be included.
2. The uses of images is good.
3. The language used is concise.
****