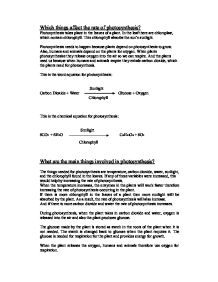 Which things affect the rate of photosynthesis?

By increasing the amount of carbon dioxide, water, and the amount of leaves on a plant, this could make photosynthesis occur faster. How will I do the experiment? To collect my results I must use the following equipment: * Beaker - to hold the water and the plant inside it * Test tube - to collect the oxygen which is to be released * Lamp - providing the light for the plant to photosynthesise * Ruler - measure the distance between the beaker and the lamp * Funnel - placed over the plant so that the oxygen that is produced does not get lost in the water * Stop clock - to record the time during the experiment Test tube Lamp Beaker Funnel Water plant Ruler Measurements I know that the rate of photosynthesis has changed because I will be monitoring the number of bubbles being released by the plant each minute. In my results table I will be writing the number of oxygen bubbles released by the plant. I will write down my results every minute. ...read more.

I did this investigation safely by not touching the lamp with wet hands, as this would have given me an electric shock, which could put my life at risk. I also made sure that the thermometer could not fall of the table causing it to break. Improvements to this investigation If I were to do this experiment again, I would improve it by allowing more time for the investigation to take place, so that more results will be colleted and that plants need more time to adapt to their surrounding. It will be measured every hour. I would also put scales on the test tube so that the volume of the oxygen bubbles would be measured. Further investigations Now that I done this investigation on effect of the amount of light intensity on the rate of photosynthesis, I could also find out about the amount of water given to the plant, the amount carbon dioxide or the temperature the plant is kept in. I would also find a number of plants that have the same number of leaves on them. To extend this, the plants will have the same surface area on the leaves. This would be an investigation to see whether a large surface area speeds up photosynthesis. ...read more.