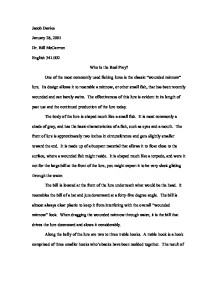 Who Is the Real Prey?

Jacob Davies January 28, 2001 Dr. Bill McCarrron English 341.002 Who Is the Real Prey? One of the most commonly used fishing lures is the classic "wounded minnow" lure. Its design allows it to resemble a minnow, or other small fish, that has been recently wounded and can barely swim. The effectiveness of this lure is evident in its length of past use and the continued production of the lure today. The body of the lure is shaped much like a small fish. It is most commonly a shade of gray, and has the basic characteristics of a fish, such as eyes and a mouth. The front of lure is approximately two inches in circumference and gets slightly smaller toward the end. It is made up of a buoyant material that allows it to float close to the surface, where a wounded fish might reside. ...read more.

To use the lure effectively, it is necessary to accurately portray what the name implies, a wounded minnow. A fish, like any other creature, is aware that wounded prey is much easier to catch and will find the temptation of an easy meal overwhelming. This means doing away with the standard method of casting a lure and immediately and steadily reeling it back in. To start fishing with a wounded minnow, find the shallow fishing spot you prefer and sit just close enough so that you can cast your lure into the area. After casting your line, let it sit in its landing spot for thirty seconds to a minute. It may seem like a long time, but the heavy lure can cause quite a noisy splash and briefly scare the fish away. You must give the fish time to return to the area before attempting to hang, or hook, one. After the ripples have subsided, it is time to reel it in. ...read more.

If, by skill or sheer chance, you do happen to hang a fish, it will usually strike from the front, or head, of the lure. The hook closest to the front of the lure is usually the one that gets hung in the fish's mouth. However, the blow from the fish hitting the lure is so severe that the opposite end of the lure will swing around and the remaining hooks will get hung in the side of the fish's head giving the lure and even stronger hold. This is good for bringing the fish up to the boat, but it can be a real pain when trying to separate the lure from the fish. If while fishing with the wounded minnow, you keep in mind what it is you are trying to imitate, rather than trying to use a mechanical formula for reeling in, you are much more likely to bring home "the big one." ...read more.