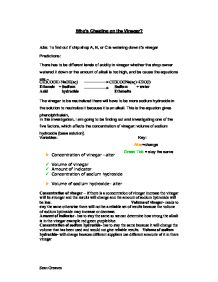 Who's Cheating on the Vinegar?

then place the flask directly under the burette and little by little add the sodium hydroxide so that it turns purple, then turn the tap off and measure accurately where the sodium hydroxide has stopped. This experiment has to be carried out extremely accurately other wise the results would not be reliable and completely inconsistent. It is also vital that everyone works together to ensure the best possible outcome of results Observation: This experiment was quite easy to complete if done correctly, however I did find problems while trying to measure the reading of the sodium hydroxide because they were inconsistent and needed to be tried again, other than that the experiment was a complete success. Fair Test: To ensure my experiment was a fair test I had to cover a few things. I made sure the factors which needed to be constant were constant such as the volume of vinegar was measured accurately, the amount of indicator was added drop by drop, the concentration of sodium hydroxide was all ready supplied, I made sure any human errors such as not switching the tap off in time was switched of to the best of my ability and if the tap was not switched off and it overdosed the vinegar the test would be preformed again until it is acurate and so making this experiment a very fair test. ...read more.

I have also found that two of my results in the table have shown the concentration of acid to be weak this is due to more sodium hydroxide being present in the vinegar solution. The graphs make this clear to understand. I found that doing a preliminary experiment helped me in my real experiment because I knew what to do and what to expect. Linking my conclusion to prediction: I predicted the more sodium hydroxide added to vinegar the less concentrated the vinegar would be, I have proved this I my experiment shown in my tables and graphs of results. Evaluation: I feel that I preformed this experiment quite well and completed it in the time required during the lesson; I think that this experiment has been a very successful one as my results supported my prediction. I feel my results were particularly accurate as I did measure the volume of sodium hydroxide 3 times in each vinegar, but if I were to do the experiment again I would do it a few more times just for extra accuracy for reliability, the tables and graphs showed straight forward results and there were no strange results (anomalies) I think this was due to accuracy and precision. I believe I could have went in more depth in my method by making it more specific but I did mention all that I did in this experiment. Sean Greaves ...read more.