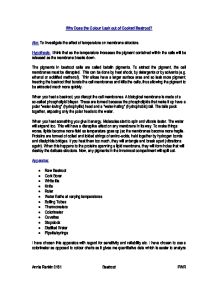 Why Does the Colour Leak Out of Cooked Beetroot?

Why Does the Colour Leak out of Cooked Beetroot? Aim: To investigate the effect of temperature on membrane structure. Hypothesis: I think that as the temperature increases the pigment contained within the cells will be released as the membrane breaks down. The pigments in beetroot cells are called betalin pigments. To extract the pigment, the cell membranes must be disrupted. This can be done by heat shock, by detergents or by solvents (e.g. ethanol or acidified methanol). Thin slices have a larger surface area and so leak more pigment; freezing the beetroot first bursts the cell membranes and kills the cells, thus allowing the pigment to be extracted much more quickly. When you heat a beetroot, you disrupt the cell membranes. A biological membrane is made of a so-called phospholipid bilayer. These are formed because the phospholipids that make it up have a polar "water-loving" (hydrophyllic) head and a "water-hating" (hydrophobic) tail. The tails pack together, exposing only the polar heads to the water. When you heat something you give it energy. Molecules start to spin and vibrate faster. The water will expand too. This will have a disruptive effect on any membrane in its way. To make things worse, lipids become more fluid as temperature goes up (so the membranes become more fragile. ...read more.

This should give me a dependant variable of the absorbency reading from the colorimeter. There are several other variables that need to be controlled however including: * Time could affect my results, as after a certain amount of time the dye may have leaked out of all them as much but at varying rates, also if we did not leave it for long enough the temperature may not have had time to take effect. I will control this by making sure I have sight of an accurate clock or stopwatch and I will record the start time. * The volume of water used would make a difference to my absorbency reading as there may be more beetroot dye per unit volume affecting the dye concentrations. Therefore the amount of water should be the same for each test-tube. This could be done by using an accurate syringe or pipette and making sure the meniscus was read accurately on the line. * The water should be distilled throughout as if there were any traces of organic solvents e.g. acetone, the phospholipid-bilayer would be destroyed and the dye leaking out may not be down to the effect of temperature. * The type of beetroot should be kept the same throughout e.g. its age, source etc. ...read more.

0.09 39 0.19 50 0.38 60 1.85 70 2.00 Graph (attached at back of report): I have plotted a line graph displaying my results. The y-axis represents the absorbance and the x-axis shows the temperature. Analysis: My graph shows an obvious trend that I can link to my results and my hypothesis. As it shows that the higher the temperature the more dye that leaks out. I have however got an anomaly which I have marked with a ring, otherwise my results all fit nicely onto a curve. To begin with there is a small positive gradient as the temperature increases, however when the temperature gets to about 50�C the gradient gets extremely steep. This shows where the membrane really starts to break down. The gradient then smoothes off at the top showing that perhaps when the beetroot gets to a certain temperature there is not much more dye to leak out. Evaluation: I am relatively pleased with my results. I think I minimised error well with my choice of apparatus and procedures. There will obviously be some small errors, such as that from the colorimeter and measuring equipment, however I cannot think of much I could do to improve the investigation. Although it could be furthered to investigate the dyes and membranes of other plants such as the red cabbage etc. ?? ?? ?? ?? Annie Rankin 0161 Beetroot PWR ...read more.