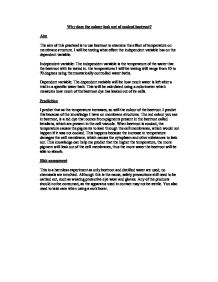 Why does the colour leak out of cooked beetroot

Although this is the cause, safety precautions still need to be carried out, such as wearing protective eye wear and gloves. Any of the products should not be consumed, as the apparatus used in contact may not be sterile. You also need to take care when using a cork borer. Results Temperature (�c ) 0 10 20 30 Absorbency (%) 0 0.07 0.10 0.31 40 50 60 70 0.35 0.41 0.59 0.63 Conclusion After plotting my results onto a graph, a have come to a conclusion that these results support the prediction I previously made that stated: the increase in temperature will cause damage to the cell membrane and cause the cytoplasm and other substances to leak out, causing a high absorbency rate. ...read more.

This inaccurate result suggests that the water was not kept constant all the way through which is why this result may have occurred. Improvements I could have made to this experiment are repeated measures to make the results more reliable rather than chance. The control experiment was highly accurate, as we used distilled water, but even this could cause inaccurate results, as a slight discoloration in the water could have effects the colorimeter. Controlling the variables in this experiment was not easy. Firstly we had to ensure that all the pieces of beetroot were cut all to the same size or else they would all have a different surface area. This would alter the effect of the experiment. If I were to do this experiment again, I may use a colorimeter because they are more accurate than the one I was using. This would eliminate the chance of any systematic errors to occur. ...read more.

***
A mostly good account which could be improved by more detailed descriptions and explanations in places.