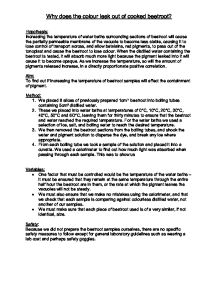 Why does the colour leak out of cooked beetroot? Hypothesis: Increasing the temperature of water baths surrounding sections of beetroot will cause the partially permeable membrane of the vacuole to become less stable, causing it to lose control of transport across, and allow betalains, red pigments, to pass out of the tonoplast and cause the beetroot to lose colour. When the distilled water containing the beetroot is tested, it will absorb much more light because the pigment leaked into it will cause it to become opaque. As we increase the temperature, so will the amount of pigments released increase, in a directly proportionate positive correlation. Aim: To find out if increasing the temperature of beetroot samples will affect the containment of pigment. Method: 1. We placed 8 slices of previously prepared 1cm� beetroot into boiling tubes containing 5cm� distilled water. 2. These we placed into water baths at temperatures of 0�C, 10�C, 20�C, 30�C, 40�C, 50�C and 6O�C, leaving them for thirty minutes to ensure that the beetroot and water reached the required temperature. For the water baths we used a selection of ice, salt, and boiling water to reach the desired temperature. 3. We then removed the beetroot sections from the boiling tubes, and shook the water and pigment solution to disperse the dye, and break any ice where appropriate. ...read more.

Phenolics, acids, and a range of nitrogenous wastes are held in the vacuole in a gel like watery substance, away from the cytoplasm. Pigments are stored alongside them in this solution. Proteins are formed of coiled and folded strings of amino acids and are generally very strong. But add too much heat to them and they will unwind, causing them to break apart. This happened to the proteins in the vacuole membrane, causing them to become unstable. The lipids themselves also become much more watery as they increase in temperature, so the membrane becomes fragile. Add this to the already unstable proteins, and the vacuole is likely to break, When we added heat to cell, every molecule began to vibrate, the most vigorously being water particles because they are so small. This causes damage to the membranes and organelles, preventing them from holding liquids in particular places and allowing the solutions to escape. Also, as the liquids heat up they will expand, pressing against the already-flimsy membranes and causing the separate compartments to burst. The data collected form our result is fairly simple to explain - the more heat added, the more pigment will be released as more damage is done to membranes within the cell. According to our results, temperatures up to 50�C all had very little effect on the cell, and the pigment measured would probably have been released with no interference from us. ...read more.

There is also a limit to the accuracy of the calorimeter - it can only measure to 0.01 accuracy, so there may have been small differences that we were unable to record, and therefore a possible error of +/- 0.005 on each of our results. This error is unlikely to make a significant difference to the general accuracy of our results. If I were to repeat the experiment I would keep each water bath in a temperature maintained environment, so that there is much less heat loss, and a smaller difference between heats lost for different temperatures. I would not use a more accurate calorimeter, as over all there was only a slight chance of fault, and at this level there is no need to gain any more accurate results as can be obtained with this particular device. Conclusion: To a certain extend, the results gained matched our hypothesis; there was a positive increase in pigment released and therefore absorbancy, alongside increase in temperature. But it was not a perfect positive correlation - for a lot of our cooler samples, there was very little difference between each piece of collected data. The hypothesis was almost scientifically justified, and the results were collected precisely and then unexpected occurrences explained. The method used was sufficient for proving or disproving the hypothesis we proposed. ...read more.