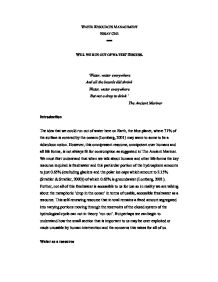 Will we run out of water? Discuss.

WATER RESOURCES MANAGEMENT ESSAY ONE ???? WILL WE RUN OUT OF WATER? DISCUSS. 'Water, water everywhere And all the boards did shrink Water, water everywhere But not a drop to drink' The Ancient Mariner Introduction The idea that we could run out of water here on Earth, the blue planet, where 71% of the surface is covered by the oceans (Lomberg, 2001) may seem to some to be a ridiculous notion. However, this omnipresent resource, omnipotent over humans and all life forms, is not always fit for consumption as suggested in The Ancient Mariner. We must first understand that when we talk about humans and other life forms the key resource required is freshwater and this particular portion of the hydrosphere amounts to just 0.65% (excluding glaciers and the polar ice caps which amount to 2.15% (Strahler & Strahler, 2000)) of which 0.62% is groundwater (Lomberg, 2001). Further, not all of this freshwater is accessible to us for use so in reality we are talking about the metaphoric 'drop in the ocean' in terms of usable, accessible freshwater as a resource. This self-renewing resource that in total remains a fixed amount segregated into varying portions moving through the reservoirs of the closed system of the hydrological cycle can not in theory 'run out'. But perhaps we can begin to understand how the small section that is important to us may be over exploited or made unusable by human intervention and the concerns this raises for all of us. ...read more.

and some predict by 2025 we could be appropriating 80% of the total accessible water in rivers and aquifers (in view of expected pollution loads and their dilution needs) (Falkenmark, 1998). It is these increases in water withdrawal and usage that have led to speculation of up to 40% on the world population living in water stress or scarce situations come 2025 (Houlder, 2003). As shown in diagram three, many African countries appear not be suffering from water stress and yet we know many have suffered drought related famine in the past. How can this be? Water availability is not simply a matter of location. Economics and power relations also play a large role. Here in the UK we pay suppliers who deliver our water direct to our homes treated and safe to drink. In many countries, including those African nations, people have to collect their own water sometimes walking for hours a day to collect enough to supply their families. The poor are often those that suffer the most whether that be living the furthest away from a water source or having to work the driest land with little hope of raising the funds to buy the technology that could increase their freshwater supply such as water stores or irrigation pipes. These are the people least likely to have 'property rights' over water resources. Development For all it's increases in water use development can also bring water saving technology. Once a population has developed an ability to manufacture or trade for technology it may be in a position to exploit new resources and/or make significant reductions in usage of existing resources. ...read more.

calling for priority in the supply of safe drinking water and sanitation services to all people and also for national water resource assessment (UNDP, 1998). This second point is most important as the effective management of water resources requires accurate data on those resources. When looking at country resources it is important to note a further complication that takes us back to the geography of water, river basins are not confined by international boundaries. In fact 214 of the world's river or lake basins, accommodating 40% of the world's population are shared by two or more countries (Mather & Chapman). Thus any effective global water strategy must be holistic to be truly effective. The first World Water Development Report was published last year (2003) on the back on the 3rd World Water Forum held in Japan the same year, the International Year of Freshwater. It notes the complexity of managing this global resource and under the heading 'Challenge 11: Governing Water Wisely for Sustainable Development' it states that 'it is agreed that the basic principles of effective governance include: participation by all stakeholders, transparency, equity, accountability, coherence, responsiveness, integration and ethical issues.' Conclusion There are pessimists and optimists creating predictions for the future state of the world's freshwater resources, in truth only time will tell. There are many hurdles to overcome along the way, not least of all climate change and the myriad of potential changes that may have on the hydrological cycle. Humankind will need to be dynamic, imaginative, holistic and committed to achieve the sustainable development of freshwater resources. ...read more.