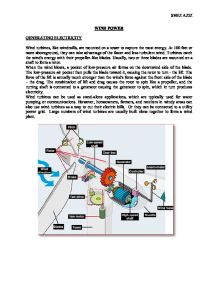 Wind turbines, like windmills, are mounted on a tower to capture the most energy. At 100 feet or more aboveground, they can take advantage of the faster and less turbulent wind. Turbines catch the wind's energy with their propeller-like blades. Usually, two or three blades are mounted on a shaft to form a rotor.

When the wind blows, a pocket of low-pressure air forms on the downwind side of the blade. The low-pressure air pocket then pulls the blade toward it, causing the rotor to turn - the lift. The force of the lift is actually much stronger than the wind's force against the front side of the blade – the drag. The combination of lift and drag causes the rotor to spin like a propeller, and the turning shaft is connected to a generator causing the generator to spin, which in turn produces electricity.

Wind turbines can be used as stand-alone applications, which are typically used for water pumping or communications. However, homeowners, farmers, and ranchers in windy areas can also use wind turbines as a way to cut their electric bills.  Or they can be connected to a utility power grid.  Large numbers of wind turbines are usually built close together to form a wind plant. 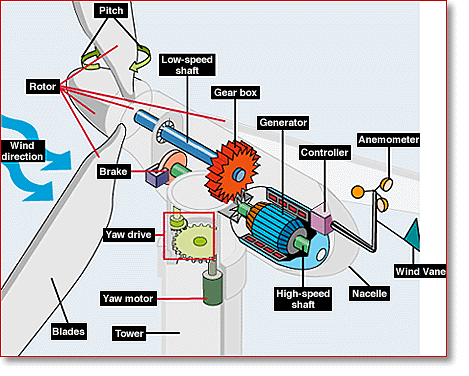 The UK has both on and offshore wind turbines and this is one of the most promising alternative energy sources being developed in the UK.  Evidently, wind power is dependant on the weather.

Wind energy may not be the most sensible source of energy for some countries, for example countries with low wind speeds would be unintelligent to rely on wind power as their main source of energy. Others renewable resources such as solar, hydroelectric, geothermal, wave, tidal and biomass should be used as well. It requires many alternative power sources to replace one conventional power station.  For example it would take 7,500 wind turbines to produce the power from one large thermal power station.  The ratio of energy consumption in the world for non-renewable energy to renewable energy is 9 to 1. The world is on its way to becoming reliant on renewable sources of energy but there is still a long way to go.

The response to the question in this piece is very good Ã¢â‚¬â€œ the candidate addresses wind power well, examining it extensively. It is hard to determine what the Ã¢â‚¬ËœquestionÃ¢â‚¬â„¢ is for this piece, but the candidate informs the reader well ...

The response to the question in this piece is very good Ã¢â‚¬â€œ the candidate addresses wind power well, examining it extensively. It is hard to determine what the Ã¢â‚¬ËœquestionÃ¢â‚¬â„¢ is for this piece, but the candidate informs the reader well about many aspects of wind power such as its history, advantages/disadvantages and its future. An overview of wind power is provided explaining the physics behind it that leads well into the rest of the piece. There is a long piece on the human and environmental advantages/disadvantages of wind power. The candidate lists many aspects such as wind farmsÃ¢â‚¬â„¢ effects on tourism which is good but these could be explored in more detail. Possibly fewer bullet points but a more in depth look at each aspect would be better.

The candidate compares wind power against other forms of energy such as fossil fuels which is good, but they could use their knowledge of physics to explain why wind power is different to others, notably why it is less effective at producing power. The history of wind farm growth could also be analysed, looking at trends in wind farm construction to further illustrate how important it is becoming.

The writing in this piece is very good Ã¢â‚¬â€œ sentences flow well and effectively convey the candidateÃ¢â‚¬â„¢s ideas. One minor flaw is the fact that the section about which countries use wind power runs into the section about what landscapes are good for wind farm construction. Although they are linked, they should ideally be separated into distinct paragraphs. The candidateÃ¢â‚¬â„¢s conclusion works well, speculating about the future of wind power as a renewable energy source. It effectively examines why countries would/would not build wind farms, showing intelligent insight into the advantages/disadvantages of wind power. Overall the piece is veryw ell done, effectively answering the question eloquently.