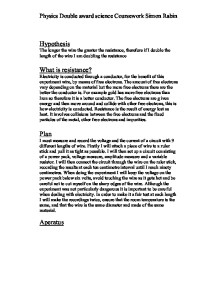 I must measure and record the voltage and the current of a circuit with 9 different lengths of wire. Firstly I will attach a piece of wire to a ruler stick and pull it as tight as possible.

All of the above must be taken into account in order for it to be a fair test as it is important that the results are accurate.

The longer my wire is the greater the resistance, because the more wire there is then the more atoms there are and therefore there will be more collisions resulting in more energy being lost as heat.

Improvements that could be made are: