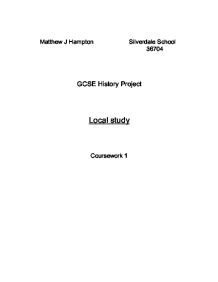 Would your visit to Shepherd wheel give you enough evidence to support what is said in Sources A, B and C?

Matthew J Hampton Silverdale School 36704 GCSE History Project Local study Coursework 1 (a) Would your visit to Shepherd wheel give you enough evidence to support what is said in Sources A, B and C? Source A: "The heyday of the water mill in Sheffield was in the late 1700's when the streams were often so crowded that the tail goit of one mill fed the dam of the next." It is true there were a many water driven mills on the river Porter as it is possible to build, so that the maximum amount of water power could be generated from this relatively small river that flows off the gritstone moors south-west of Sheffield. The head goit that feeds the Shepard wheel dam arises at the bridge where the tail goit of the no longer existing leather mills rejoins the Porter River. The tail goit of the Shepard wheel dam rejoins the Porter only 10 yards above the sluice and weir for the head goit of the Ibbotson dam, which still exists as a duck pond, although the wheel and mill buildings have been demolished. All along the Porter the 5 mills follow on another as closely as possible. From the evidence that I saw on my trip to the Shepherd Wheel it is clear that the river was as full as possible with water driven mills and that the tail goit of one mill is very close to the dam of the next mill. ...read more.

This is because I did not see a fannie in the shepherds wheel although there was one installed there was no evidence on my trip to shepherds wheel the only evidence of that could be seen on my trip of a fannie was of the chimney what very possibly could have been for the fire hearth. 'A visit to the Upper Porter Valley is a useful way to learn about its water power and the cutlery industry in the early nineteenth century' (b)(i): "How useful are the various sites in the Upper Porter Valley for learning about water powered sites and the cutlery industry before 1850?" The upper Porter Valley stretches from the Porter River above the Forge Dam, past the Wire Mill dam and the leather dam site to the Shepard's Wheel and the Ibbotson dam. Many people who visit this site are unaware of how important this little river was to the iron and cutlery industries in Sheffield 200 years ago. This is because most of the buildings and wheels have disappeared and all that is left are the water works and most of the dams. To the uninterested or uninformed there is little left of the industry, but to those who look hard there is much information. The first site is the forge dam. Here iron and steel was made by Thomas Boulsover. The dam is unusual in that there is no head goit, the river flows straight in. ...read more.

Because they are still attractive to local people and visitors, the goits, weirs and dams have been repaired and still work. The leather mill site and the lake opposite the caf� are the only areas that have completely changed. The city council has maintained the old roads as footpaths and bridleways and the area are enjoyed by young and old alike, even if they do not understand the rivers important industrial past. There is also the monument to Boulsover erected by the master cutler to remind people about the importance of the river, even though Boulsover's old rolling mill site has been renamed the wire dam, from a later use of the site. There is therefore much evidence in the valley to provide a quite good understanding of water power, especially if you look hard. There is much less evidence to help you understand the cutlery industry in the Porter Valley. The forge and rolling mills have gone. The grinding trow at the Shepard's wheel is preserved, but is seldom open to the public and does not work at present, and some parts of the cutlery industry, such as buffing and putting on the handles, never were carried out in the Valley, these being industries carried out in the town center workshops. If you already know about cutlery making, the sites and names are interesting, but if you do not know about water powered cutlery making, a walk along the Porter Valley would teach you little. ...read more.