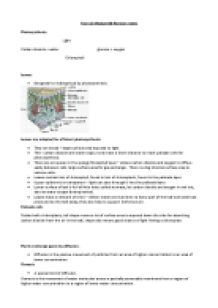 ﻿Year 11 Module B4 Revision notes Photosynthesis: Light Carbon dioxide + water glucose + oxygen Chlorophyll Leaves 1. Designed for making food by photosynthesis. Leaves are adapted for efficient photosynthesis: 1. They are broad ? large surface area exposed to light 2. Thin- carbon dioxide and water vapour only have a short distance to reach palisade cells for photosynthesis. 3. There are air spaces in the spongy Mesophyll layer ? allows carbon dioxide and oxygen to diffuse easily between cells, large surface area for gas exchange. There is a big internal surface area to volume ratio. 4. Leaves contain lots of chlorophyll, found in lots of chloroplasts, found in the palisade layer 5. Upper epidermis is transparent ? light can pass through it into the palisade layer. 6. Lower surface of leaf is full of little holes called stomata; let carbon dioxide and oxygen in and out; also let water escape (transpiration). 7. Leaves have a network of veins ? deliver water and nutrients to every part of the leaf and take food produced by the leaf away; they also help to support leaf structure. Palisade cells Packed with chloroplasts; tall shape means a lot of surface area is exposed down the side for absorbing carbon dioxide from the air in the leaf; shape also means good chance of light hitting a chloroplast. Plants exchange gases by diffusion. 1. Diffusion is the passive movement of particles from an area of higher concentration to an area of lower concentration. Osmosis 1. A special kind of diffusion. Osmosis is the movement of water molecules across a partially permeable membrane from a region of higher water concentration to a region of lower water concentration. A partially permeable membrane is one with very small holes in it ? water can pass through but larger molecules can?t. The water molecules can pass through both ways ? they move randomly all the time. ...read more.

energy lost at 1st trophic level = 80 000 kJ ? 10 000 kJ = 70 000 kJ lost Efficiency of energy transfer can be calculated using the following formula: Efficiency = energy available to the next level x 100 energy that was available to the previous level At the first trophic level efficiency of energy transfer = 10 000 KJ / 80 000 kJ x 100 = 12.5 % efficient Biomass and intensive farming Energy stored in biomass can be used for other things Energy can be released by eating it, feeding it to livestock, growing the seeds of plants and using it as a fuel. For a given area of land a lot more food for humans can be produced by growing crops than by grazing animals, e.g. only about 10% of the biomass eaten by beef cattle becomes useful meat for people to eat. However, it is important to get a balanced diet, this is difficult to achieve from just eating crops, also some land isn?t suitable for growing crops (moorland or fell-sides), here animals like sheep and deer are the best way of getting food from the land. Biomass can also be used for fuel. Two examples: 1. Fast-growing trees ? burning trees is ok provided it is balanced by using fast-growing trees planted especially for the purpose. Each time trees are cut down more are planted to replace them. The carbon dioxide emissions are balanced as the replacement trees are still removing carbon. 2. Fermenting biomass using bacteria or yeast ? fermenting is breaking down by anaerobic respiration. Micro-organisms can be used to make biogas from plant and animal waste; this is done in a simple fermenter called a digester. The biogas can be burned to release the energy for heating, powering turbines etc... Why the development of biofuels is good: 1. They?re renewable 2. They reduce air pollution ? no acid rain gases are produced 3. ...read more.

are burned (combustion). This releases carbon dioxide back into the air. The other major carbon recycling pathway occurs in the sea. Marine organisms make shells made of carbonates. When they die the shells fall to the ocean floor and eventually form limestone rocks. The carbon in these rocks may return back to the atmosphere as carbon dioxide during weathering or volcanic eruptions. The Nitrogen Cycle The atmosphere contains 78% Nitrogen gas; this is very unreactive, it can?t be used directly by plants or animals. Nitrogen is needed to make proteins for growth. Plants get their nitrogen from the soil; nitrogen in the air has to be turned into nitrates before the plants can use it. Animals get their proteins by eating the plants and each other. Decomposers break down the proteins in rotting plants and animals and urea in animal waste into ammonia (NH3). The nitrogen in these organisms is recycled. Nitrogen fixation is the process of turning nitrogen from the air into nitrogen compounds in the soil which plants can then use. This happens through two main ways: 1. Lightning ? the energy in a bolt of lightning makes the nitrogen in the air with the oxygen in the air to give nitrates. 2. Nitrogen ? fixing bacteria in the roots and soil. There are four different types of bacteria involved in this cycle: 1. Decomposers ? decompose proteins and urea and turn them into ammonia 2. Nitrifying bacteria ? turn ammonia in decaying matter into nitrates 3. Nitrogen-fixing bacteria ? turn atmospheric nitrogen into nitrogen compounds that plants can use. 4. Denitrifying bacteria ? turn nitrates back into nitrogen gas Some nitrogen-fixing bacteria live in the soil. Others live in the nodules on the roots of legume plants (remember they?re often used as a crop in crop rotations as legume plants are good at putting nitrogen back into the soil). The plants have a mutualistic relationship with the bacteria, this means the bacteria get food (sugars) from the plant and the plant gets nitrogen compounds from the bacteria to make into proteins ? it is a relationship that benefits them both. ...read more.

****
A very detailed set of revision notes. A good grasp of concepts demonstrated.