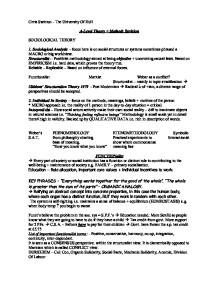 Chris Swinton - The University Of Hull A-Level Theory + Methods Revision SOCIOLOGICAL THEORY 1. Sociological Analysis - focus here is on social structures or systems sometimes phrased a MACRO or big worldview. Structuralist: - Positivist methodology aimed at being objective + uncovering causal laws. Based on EMPIRICISM i.e. hard data, which proves the theory true. Reliable - Replicable - Based on influence of external forces. Functionalist Marxist Weber as a conflict? Structuralist - mainly in topic stratification --> Giddens' Structuration Theory 1979 - Post Modernism --> Radical ? of +ism, a diverse range of perspectives should be accepted. 2. Individual In Society - focus on the methods, meanings, beliefs + motives of the person * MICRO approach i.e. the reality of 1 person in the day-to-day situation = critical. Interpretivist - How social actors actively make their own social reality - diff to inanimate objects in natural sciences i.e. "Thinking feeling reflexive beings" Methodology is small scale yet in detail there4 high in validity. Backed up by QUALITATIVE DATA i.e. rich in description of words. Weber's PHENOMENOLOGY ETHNOMETHODOLOGY Symbolic S.A.T. from philosophy charting Practical experiments to Interactionist base of meaning. show where commonsense "How you know what you know" meaning lies FUNCTIONalist --> Every part of society or social institution has a function or distinct role in contributing to the well-being + maintenance of society e.g. FAMILY - primary socialisation. Education - Role allocation, important core values + individual incentives to work. KEY PHRASES - "Everything works together for the good of the whole". "The whole is greater than the sum of its parts" - ORGANIC ANALOGY. --> Reifying an abstract concept into concrete properties, in this case the human body, where each organ has a distinct function, BUT they work in tandem with each other. The system is self-righting i.e. maintains a sense of balance + equilibrium (HOMEOSTASIS) e.g. when body temp ? ...read more.

why a person becomes criminal. * SAT sees understanding as the key focus of sociology, not explanation. * Verstehen. Nothing is objective + measurable as everyone has different perceptions. Assumptions - External forces shape our actions. Positive methods will resemble structuralist to explain causal relationships e.g. poverty - influences a woman's reasons for becoming a prostitute. The Importance Of The Theory - SAT offered the 1st rigorous criticism of Structuralist theories, for e.g. Weber's work on the rise of capitalism emphases the role of ideas in producing soc. change. For Marx, economic determinism (ownership of wealth + the means of production) shapes everything else in society. Rather then seeing consciousness + ideas shaped by objective + economic forces, W. sees consciousness, ideas + social situations to be the products of actors (people) in their social groups. There is no objective social reality external to man. It is our own interpretations by what we see class systems etc. Social situations that are defined as "real" by actors and are "real" in their effects. SAT Broken Down * The values + perceptions of a situation determine the actors choice of goals - selection of the means of achieving these goals. * The meanings attributed to the behaviour by the actor + others determines soc. action not external social forces. * The social world exists only in the mind of people. It has not objective (all see in the same way) external reality, in that we all may perceive it differently. * Social order emerges from shared meanings. * Roles = negotiated by people not imposed by a ruling class (Marx) or shaped by a norm (Durk). Method Broken Down * The approach = anti-positivist + rejects scientific measurement + hypothesis. * The sociologist should seek to understand the meanings that the actor attaches to events in the social world. * Insight into the actor's experience of the world can be achieved by understanding the language; meaning can be achieved by "Verstehen Methods". ...read more.

* Make sure the diff strata in the population are correctly represented in sample. * Make sure everyone in the sample population has an equal chance of being selected. * Try to ensure the full sample are interviewed i.e. common fault with postal Q's - their low response rate. --> Similar Q's should be easily understood by different respondents + capable of eliciting a precise answer. Sampling Techniques - Random sample - based on pure chance. Everyone has the same likelihood of being selected. * Systematic (or quasi-random) - every Nth person in the sampling frame is chosen. A sampling force is the list from which those to be sampled are drawn (such as an electoral register). * Stratified - a random sample = taken from predetermined categories such as occupation, age, gender or ethnicity. This ? the chances of obtaining a representative sample. * Quota sampling - the "High Street" version of stratified. The researcher stands in a city centre street + interviews quotas of people e.g. N number of single men, women aged over 30, manual workers, etc. This is a quick but less reliable method. * Cluster or multi-stage sampling - Instead of researchers interviewing respondents in every city a no# or representative cities are selected. Then a number of representative areas are selected within each of the selected cities. Thus one sample is drawn from another. Samples can be UNREPRESENTATIVE yet still produce valuable results --> Snowball sampling - based on personal recommendation + is sometimes referred to as opportunity sampling. The researcher finds 1 suitable respondent, who then introduces the researcher to another suitable respondent who in turn, introduces the researcher to another and so on. It provides a way of investigating groups, which may be reluctant to be investigated. Respondent Sampling - Those selected = of particular relevance to the investigation. Classic e.g. = The affluent worker study (1968) in Luton. The above-average wages of the Luton car workers made them untypical of the British W.C. But this very untypically made them an ideal group on which to test out the embourgeoisiement theory. ...read more.