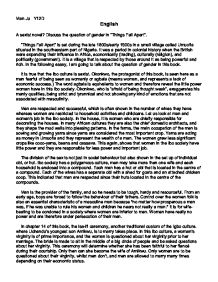 A sexist novel? Discuss the question of gender in &quot;Things Fall Apart&quot;.

Man Ju Y12D English A sexist novel? Discuss the question of gender in "Things Fall Apart". "Things Fall Apart" is set during the late 1800s/early 1900s in a small village called Umuofia situated in the southeastern part of Nigeria. It was a period in colonial history when the British were expanding their influence in Africa, economically (trading), culturally (religion), and politically (government). It is a village that is respected by those around it as being powerful and rich. In the following essay, I am going to talk about the question of gender in this book. It is true that the Ibo culture is sexist. Okonkwo, the protagonist of this book, is seen here as a man fearful of being seen as womanly or agbala (means woman, and represents a lack of economic success.) The word agbala is equivalents to women and therefore reveal the little power woman have in this Ibo society. ...read more.

Man is the provider of the family, and so he needs to be tough, hardy and resourceful. From an early age, boys are forced to follow the behaviour of their fathers. Control over the women folk is also an essential characteristic of a masculine man because "no matter how prosperous a man was, if he was unable to rule his women and children he nears not really a man." It is for wife-beating to be condoned in a society where women are inferior to men. Women have really no power and are therefore under persecution of their men. In chapter 14 of this book, the isa-ifi ceremony, another traditional custom of the Igbo culture. where Uchendu's youngest son Amikwu, is to marry takes place. In this Ibo culture, a woman's virginity is of prime importance, and the woman is questioned about her virginity prior to her marriage. The bride is made to sit in the middle of a big circle of people and be asked questions about her virginity. ...read more.

Here is another exception showing us that women are sometimes important in the Ibo society. At the beginning of Part II, Okonkwo has fled his "fatherland" Umuofia for committing a "female" ochu, and he has taken his family to his "motherland" Mbanta. Uchendu, Okonkwo's uncle, calls Okonkwo and his sons together and makes Okonkwo understand that he has come to his mother's land for refuge, and that he cannot continue to be displeased with his present circumstances nor should he sulk or despair about his fall from power. He tells Okonkwo that if he denies the support of his motherland, then this will displease the dead. He makes him realize that though man is considered the head of a family, it is the "mother who is supreme" and therefore it is she who will give him renewed energy to start over again. This shows mother, a female, is an important character in the Ibo society. As an overall, women in the Ibo society have little rights and power. Men are the provider of a family so they are respected. Hence I agree that this book is a sexist novel. ...read more.