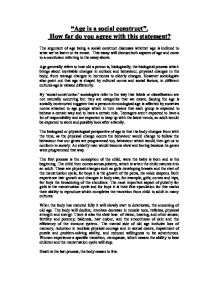 &quot;Age is a social construct&quot;. How far do you agree with this statement?

"Age is a social construct". How far do you agree with this statement? The argument of age being a social construct discusses whether age is inclined to what we've learnt or its innate. This essay will discuss both aspects of age and come to a conclusion referring to the essay above. Age generally refers to how old a person is, biologically, the biological process which brings about inevitable changes in outlook and behaviour, physical changes in the body, from teenage changes in hormones to elderly changes. However sociologists also point out that age is shaped by cultural norms and social factors, in different cultures age is viewed differently. By 'social construction' sociologists refer to the way that labels or classification are not naturally occurring but they are categories that we create. Saying the age is socially constructed suggests that a persons chronological age is affected by societies norms attached to age groups which in turn means that each group is expected to behave a certain way and to have a certain role. Teenagers aren't expected to have a lot of responsibility and are expected to keep up with the latest trends, an adult would be expected to work and possibly look after a family. The biological or physiological perspective of age is that the body changes from with the time, as the physical change occurs the behaviour would change to follow the behaviour that our genes are programmed too, behaviour which would then get us to conform to society. ...read more.

Musgrove (functionalist) suggests that in the late 18th and 19th century parents saw their children as economical assets and valued them to help earn an income. The abilities and skills of children were becoming largely valued in the new industries. However after the introduction of the Education Act in 1870 the birth rate slumped, children were no longer as important to the economy and were moving outwards to more trivial occupations. This shows that children didn't always attend school, children having to go to school gave them a childhood. The adolescent period or teenage phase is also a generally new stage. Adolescence being linked to puberty refers to the transitional period from child to adult and to the changes one goes through at this time. This is influenced by the society surrounding the child and therefore is different from culture to culture. Different values and norms establish each cultures adolescent stage, in some cultures legislations also define this stage. In the united kingdom there are laws that identify certain life stages, for example the legal age of consent which, over the years, has increased in the 1860's the legal age of consent was twelve years old, in 1885 the legal age was increased from twelve to sixteen. This change was due to a belief of an increase in child prostitution. ...read more.

Being young, middle aged or old varies depending on ethnicity and gender. According to David Gillborn education, employment and job oppurtinites vary depending on ethnicity. People from different ethnic groups are likely to be discriminated against finding it difficult to get decent life chances and a decent life. Feminists argue that women earn less and get less promotions but live longer then men giving them larger pensions then their male partners, however lower wages means that their pension is less then the males because they have earned less over the years then men. Age is socially constructed, although there are some biological aspects to the legislations and social view points that define the age such as conception, puberty and degeneration. History has shown the changes in the viewpoints towards age and the different perceptions from child to adult to elderly, changes that have occurred due to legislations and advances in technology and medical science. Other cultures have shown that age is a social construct by their traditions and initiations at certain ages which vary from each culture. Class, Gender, Ethnicity have also proven to effect age , that stratification in society effects how one would perceive age. The idea that definitions of age change due to time and trends enforces that age must be a social construct. ...read more.