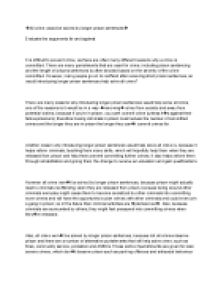 All crime would be solved with longer prison sentences. Evaluate the arguments for and against.

being around other criminals everyday might cause them to become socialized by other criminals into committing more crimes and will have the opportunity to plan crimes with other criminals and could even join a gang in prison, so in the future their criminal activities are �planned out�. Also, because criminals are surrounded by others, they might feel pressured into committing crimes when they�re released.   Also, all crime won�t be solved by longer prison sentences, because not all crimes deserve prison and there are a number of alternative punishments that will help solve crime, such as fines, community service, probation and ASBOs. These sorts of punishments are given for less severe crimes, which don�t deserve prison such as parking offences and antisocial behaviour and ...read more.

So longer prison sentences might help solve the crime that has been discovered, but it won�t help solve crime that�s been unreported.   Overall I think that longer prison sentences will help some crime, because prison can help reform criminals and the longer they spend in prison, the longer they have to reform before they are released back into society, however but I don�t think it will solve all crime, because firstly being around other criminals can have a bad affect, as criminals can be socialized to commit more crime in prison and it won�t solve all crime, because of a lot of crime goes unreported, so many criminals can commit crimes without being caught. ...read more.

A good piece of work explaining why longer prison sentences would remove the problem of crime. There were some good examples given but there was scope to include a few more. I would also suggest that the writer indicates that they are aware of the ?revolving door? syndrome ? the fact that many offenders in prison have been inmates before therefore does prison really habilitate? The writing style is good overall.
4/5