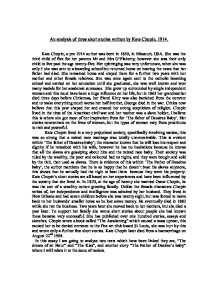 An analysis of three short stories written by Kate Chopin, 1914.

An analysis of three short stories written by Kate Chopin, 1914. Kate Chopin, a pre 1914 author was born in 1850, in Missouri, USA. She was the third child of five for her parents Mr and Mrs O'Flaherty; however she was their only child to live past the age twenty-five. Her upbringing was very unfortunate, when she was only 5 she was sent to a boarding school but returned home on hearing the news that her father had died. She remained home and stayed there for a further two years with her mother and other female relatives. She was once again sent to the catholic boarding school and carried on her education until she graduated, she was well known and won many medals for her academic successes. She grew up surrounded by single independent women and this must have been a huge influence on her life, but in 1863 her grandmother died three days before Christmas, her friend Kitty was also banished from the convent and to make everything much worse her half brother, George died in the war. Critics now believe that this year shaped her and created her strong scepticism of religion. Chopin lived in the time of the American civil war and her mother was a slave holder, I believe this is where she got most of her inspiration from for 'The father of Dessires Baby'. ...read more.

When I read the story it had a normal setting, this shows that in her society this kind of behaviour about women being ruled by the men happened in normal settings, and that it was nothing out of the ordinary. There is evidence in this "it was only yesterday that she thought with a shudder that her life would be long", this shows that she didn't want to live long with her husband ruling over her. The second short story by Chopin is 'The kiss'. Within this story there is a wealthy man and a poor man, which are two contrasting characters and a woman. The rich man is called Brantain. Brantain sat in one of these shadows; it had overtaken him and he did not mind. The obscurity lent him courage to keep his eves fastened as ardently as he liked upon the girl who sat in the firelight. "She was very handsome", we know this as the beginning it says she is. "With a certain fine, rich coloring that belongs to the healthy brune type. She was quite composed, as she idly stroked the satiny coat of the cat that lay curled in her lap, and she occasionally sent a slow glance into the shadow where her companion sat. They were talking low, of indifferent things which plainly were not the things that occupied their thoughts. ...read more.

It was Desiree's fault the baby was mixed blood, but it was too late to turn back now his love, and baby are dead. This story explains well that racism was a big issue in those days. It was such an issue that it often led to death. People died for their country in the American civil war for what they believed was a good principal: They believed blacks shouldn't be integrated into their society. Times have changed since then and people from all cultures live anywhere now. Pre 1914 stories have a point to put across; Kate Chopin's is that women are as good as men and that they deserve the same rights as them. I believe that she would have taken part in the suffragette movement if she had had a chance to prove her pint. The times in which she lived were very sexist as I have described. There is a large range in the women in her stories from farmer's wives to rich women. She is trying to say that sexism happens in all types of societies, these women are all put in misery in one point. In "The father of Desiree's Baby" the women is forced to kill herself, and in "Dr Chevaliers lie" the women gets murdered these things would not happen to men in Kate Chopin's society as they were too important and looked up to. ...read more.