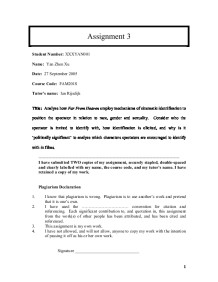 Analyze how Far From Heaven employ mechanisms of cinematic identification.

Cathy is lead to an unhappy life because of what her community expects her to be. Far From Heaven also addresses the situation of non-whites in America. Even though the lead role is a white woman, Haynes also portrays the painful experiences of being a black man in a white supremacist society (Fanon, F, 1925:61). This allows the audience to identify with Raymond, especially in the scene where Raymond's daughter is thrown with stones by white boys. Haynes works on the audience's sympathy for Raymond and his daughter. It is also seen in the scene where Cathy says goodbye to Raymond in public and he tries to stop her. The public sees Raymond holding Cathy's arm which causes a stir. Tragically, at the same time, Cathy feels guilty yet ashamed to be seen with him in public. The audience may feel angry with Cathy's character, as she put Raymond in the position of being discriminated, yet she is too ashamed to do anything. The audience wants to see justice. "They physical characteristics that determined gender are with us from the day we are born and are changeable only by surgery, exactly how much of gender is socialized, is constructed, is debatable" (Woodward, S, Lecture notes: Gender, Sexuality and Ideology, 23 August 2005). Gender is socially constructed, yet the biology of a person is essential to determine the person's gender. It becomes a role that is almost wholly learned. It is how we define ourselves. Gender is a term developed often used as a contrast term to 'sex' to depict the socially constructed as apposed to which is biologically given. ...read more.