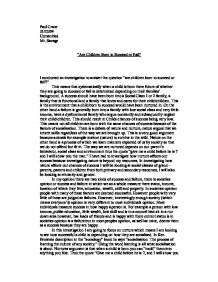 Paul Crane 31/12/04 Humanities Mr. Savage "Are Children Born to Succeed or Fail" I conducted an investigation to answer the question "are children born to succeed or fail?" This means that systematically when a child is born there future of whether they are going to succeed or fail is determined depending on their families' background. A success should have been born into a Social Class 1 or 2 family, a family that is functional and a family that loves and cares for their child/children. This is the environment that a child born to succeed would have been nurtured in. On the other hand a failure is generally born into a family with low social class and very little income, have a dysfunctional family who argue constantly and subsequently neglect their child/children. This should result in Childs chances of success being very low. This means not all children are born with the same chances of success because of the factors of socialisation. There is a debate of nature and nurture, nature argues that we inherit skills regardless of the way we are brought up. This is a very good argument because animals for example instinct (nature) to survive in the wild. Nature on the other hand is a process of which we learn manners expected of us by society so that we do not offend but fit in. The way we are nurtured depends on our parent's behaviour, social class and environment thus the quote "give me a child before he is 7 and I will show you the man." I have had to investigate how nurture affects our success because investigating nature is beyond my resources. In investigating how nature affects our chances of success I will be looking at social classes of grand - parents, parents and children from both primary and secondary resources, I will also be looking at ethnicity and gender. ...read more.

Therefore Social Class effects weather a child succeeds or fails. Gender also effects weather or not a child succeeds or fails. Gender also effects weather or not a child succeeds or fails. This is because of sexist stereotypes that parents and teachers inflict upon a child at an early age. The "Socialisation Student Booklet" proves this. Simple things like the toys parents buy there children and the nursery rhymes sung to the two genders. For Example boys at an early age are given toys that are competitive and toys that they are in control of like Racing Cars. Girls on the other hand are given toys that require love and caring for like dolls. Furthermore, both genders are usually sung these nursery rhymes. "What are little girls made of, sugar and spice and all things nice, that's what little girls are made of." "What are little boys made of, Slugs and snails and puppy dogs tails, that's what little boys are made of." This tells young children from an early age that there is a difference between the two genders. It also tells boys to be competitive in the world whereas females are meant to be loving. Therefore when a child leaves school males would be more likely to further there education whereas females even though better achievers at school are socialised to not go to university but find a husband and get married. I feel that in contradiction to my prediction that females and Asians will succeed, I now feel that White males will succeed in the world of work. Now that it is October I am going to on work experience, which means that I am going to experience the world of work for two weeks. Whilst on my work experience I am going to integrate it into my studies as this will allow me to see that if my theory of White men succeeding is accurate. ...read more.

It also supports the idea that men achieve greater success than women, 50% of the males belong to social class 1 and 2 and 100% of the male participants belonged to social class 3b and above. However 50% of the female participants belonged to social class 4. My investigation into "7up" and "28up" also gives a supporting verdict. I showed that all of the children in social class 1, 2 either improved or stayed into the same social class. It shows that if you are nurtured in social class then (in general) you will also end up in adult hood as a success. This also supports the idea of males going to university and competing for jobs because 3 of the females who were in social class 5 as children attended no further education and are unemployed and only in social class 3b due to marriage. My work experience survey heavily supports the idea of gender and ethnicity affecting job status. It shows that in 12 companies taken on management (the highest status in businesses) 52% of them were male. Even more farfetched 97.7% of management team were white. My primary research showed that in the work place white, middle class men will succeed. My secondary research shows that white, middle class, men will succeed. They both prove the same thing. So the answer to "are children born to succeed or fail?" on evidence I have to say yes children are either born to succeed or fail. This is because if you are born into a higher social class then you are generally more structured and the higher the enthuses of education than that of lower social classes. I fell that nature gives us limited ability however it is how we are nurtured that makes us use the most of that ability. Limitations The limitations to my essay were the sizes of the samples. I was unable to get a true reflection on every area of the country because I did not have the time or resources to do as such. Also not all of the sources were reliable. ...read more.