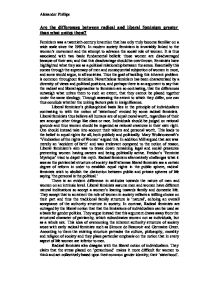 Are the differences between radical and liberal feminism greater than what unites them?

Are the differences between radical and liberal feminism greater than what unites them? Feminism was a twentieth-century invention that has only truly become familiar on a wide scale since the 1960's. In modern society feminism is invariably linked to the women's movement and the attempt to advance the social role of women. It is thus associated with two basic fundamental beliefs: those women are disadvantaged because of their sex; and that this disadvantage should be overthrown. Feminists have highlighted what they see as a political relationship between the sexes. Essentially this comes through the supremacy of men and consequential subjection of women in most, and some would argue, in all societies. Thus the goal of tackling this inherent problem is common throughout feminism. Nevertheless feminism has been characterised by a diversity of views and political positions, and perhaps there is an argument to say that the radical and liberal approaches to feminism are so contrasting, that the differences outweigh what unites them to such an extent, that they cannot be placed together under the same ideology. Through assessing the extent to which they differ, one can thus conclude whether the uniting factors pale in insignificance. Liberal feminism's philosophical basis lies in the principle of individualism contrasting to with the notion of 'sisterhood' evoked by some radical feminists. ...read more.

Typically the family is heralded by a father figure, the amount of women in government, in the House of Lords and Commons is minute. In a recent article in 'The Independent' statistics show that even now only 20% of women are MP's, that only 33% of women are managers, that there are only 6 women in the cabinet; radicals claim that this is reason to criticise the patriarchal nature of society. While liberals take the view that women should aim for formal equality and thus historically argued for a change in the law, radical feminism argues that liberals are wrong to assume that they can ensure equality through changing the law because the system is inherently swung in favour of men. Instead they argue that it is the overall structure, within which the laws lie, that needs to be reassessed, because women are within that society. Radicals believed that gender differences were culturally bestowed upon men and women and must ultimately be abolished because the sexes are actually equal and identical. There are however some differing views on this with the pro-woman position being that women are superior to men is certain ways, such as that they are caring, creative and sensitive. ...read more.

This argument however is flawed in that there is still a great degree of debate between the two strands. Rosalind Coward and Germaine Greer, for example, have fundamentally different takes upon Feminism and its 'world view'. Coward argues in "Sacred Cows" that feminism is out of touch; it relentlessly insists that the world is still divided, but that this is not true anymore. Greer claims that the success of feminism on the suface is being undermined by the nature of the success and that there is actually little true success. An interesting development has arisen, where Coward suggests that the 'Greer-type' feminists are only ruining the feminist movement with outdated concepts and that consequentially there has been a backlash by men on the defensive, and a return therefore to the 'hairy-legged' feminist stereotype that previously hindered feminist developments. While such views cannot truly be seen as reflecting the liberal and radical poles, they nevertheless echo inherent differences. It seems that in conclusion, the question of whether the differences between radical and liberal feminism are greater than what unites them is a little unfair. While the differences seem to outnumber the factors that unite them, the fundamental attempt to work to create a more positive role for women in society is underlying in both, and it is this uniting principle that defines the ideology. ?? ?? ?? ?? Alexander Phillips ...read more.

This is a really impressive answer, firstly beginning with a great explanation of the general feminist movement. It is immediately evident that the writer has sound knowledge of the subject, because they refer to gender politics, which is usually difficult ...

This is a really impressive answer, firstly beginning with a great explanation of the general feminist movement. It is immediately evident that the writer has sound knowledge of the subject, because they refer to gender politics, which is usually difficult for GCSE candidates to understand (let alone explain in their essays). It explicitly mentions the particular question asked at the end of the introduction, Ã¢â‚¬Å“Through assessing the extent to which they differ, one can thus conclude whether the uniting factors pale in insignificanceÃ¢â‚¬Â which is brilliant because the examiner will realise at this early stage of reading that the writer will provide arguments regarding this specific debate. The essay is very well structured, as it starts with explaining liberal feminist beliefs, then providing more detail, then radical feminist beliefs and so on. This essay style works really well, showing the examiner that they have an organised and focused mind, before providing an insightful and sensitive conclusion.

Key feminist sociological terms are mentioned throughout the essay, Ã¢â‚¬Å“patriarchyÃ¢â‚¬Â, Ã¢â‚¬Å“sexual oppressionÃ¢â‚¬Â as well as more generic terms in sociology, Ã¢â‚¬Å“ideologyÃ¢â‚¬Â and Ã¢â‚¬Å“individualismÃ¢â‚¬Â. They are mentioned so often that it is clear the candidate is astute, knowing what needs to be included to gain the highest marks. They also include key feminist thinkers and their published works, Ã¢â‚¬Å“FreidanÃ¢â‚¬â„¢s Ã¢â‚¬ËœFeminist MystiqueÃ¢â‚¬â„¢Ã¢â‚¬Â and those of their critiques, Ã¢â‚¬Å“Coward argues in Ã¢â‚¬ËœSacred CowsÃ¢â‚¬â„¢ that feminism is out of touchÃ¢â‚¬Â. It just provides the necessary context when explaining a certain viewpoint.
The writer makes good use of statistics and article references, Ã¢â‚¬Å“In a recent article in Ã¢â‚¬ËœThe IndependentÃ¢â‚¬â„¢ statistics show that even now only 20% of women are MPÃ¢â‚¬â„¢s, that only 33% of women are managersÃ¢â‚¬Â¦Ã¢â‚¬Â which is something professional sociologists strive to do, as it gives evidence to their argument Ã¢â‚¬â€œ rather than basing it purely on assumption. This suggests that the candidate has contemporary knowledge of feminist issues as they are able to relate them to current examples. This is really crucial to do in order to prove that the issue of feminism is not dated.

This answer is extremely well written Ã¢â‚¬â€œ there are only a tiny number of small errors. Spelling is perfect; however capital letters are used in the middle of sentences, Ã¢â‚¬Å“PatriarchyÃ¢â‚¬Â which is grammatically incorrect. The writer frequently makes good use of varied punctuation, Ã¢â‚¬Å“they notice that a downside of the rhetoric of the equality of the individual is that the success of whatever plan be it might be is down to that individual, and thus equally the failure Ã¢â‚¬â€œ progression for women is thus fundamentally restrictedÃ¢â‚¬Â which gives the impression that their essay is sophisticated and well crafted.