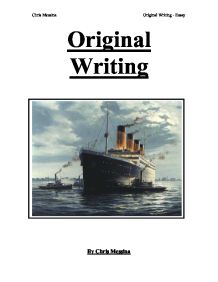 As a forty-four year old lady with a family, I was very nervous about boarding the R.M.S Titanic, for the sakes of my whole entire family. Recently my daughter Dorothy almost drowned in a well

Original Writing By Chris Messina It was the morning of the tenth of April, 1912, and the R.M.S Titanic was ready for sale from Southampton harbour. There was a sense of purity in the air, a fresh start, and a whole new life, the R.M.S Titanic was near enough ready for its voyage to come. Travelling with no source of relatives at all except my own family, I was nervous yet still very excited. The whole entire ship was fully packed, the atmosphere was outstanding. Everyone was leaving their loved ones and many were leaving their homes, but for my family and me, it was a fresh start to come. Straight away I wanted to explore my part of the ship, third class, although it was the lower class and the least luxurious part of the ship, I was still eager to search around and get used to my accommodation and life style I was yet to embark on the voyage. My family were very poor and could only afford a third class ticket which we were lucky to get anyway! The third class ticket was twelve pounds and twenty pence. Altogether for the total of seven in my family which included my husband and I, the cost came to an unbelievable eighty-five pounds and forty pence; we were planning to use the funds to give our children when they grew up. As a forty-four year old lady with a family, I was very nervous about boarding the R.M.S Titanic, for the sakes of my whole entire family. ...read more.

We became close; the man even showed me pictures of him and his family, all out in New York awaiting his arrival. On that night I observed how it was the most silent night of the whole time spent on the voyage, I thought to myself that the reason being, everyone had settled in, everyone that is, except me and how I was feeling. Back in my room watching my five beautiful children sleep like angels in peace, all I could think about was the conversation me and the man opposite in our room had previously had. What if it was all true and what I was expecting to happen would happen? Or what if it was my imagination running loose? I just did not know. All I could do was just sit there, sit and stare at anything I could keep my eyes on before drifting off into another day dream. I decided to take a brisk and gentle walk along the deck; my husband was drinking and dancing with his new friends from down the hall. However I was not in the mood for quite all that, I needed a stroll to clear my imaginative thoughts. I started to slow down as I felt my head getting heavier and heavier as I thought more and more about what could happen, when all of a sudden I hear a call from the Crows Nest, "ICE BERG STRAIGHT AHEAD, QUICK CALL THE CAPTAIN AND TELL HIM HARD STARBOARD! ICE BERG STRAIGHT AHEAD!" ...read more.

I was ecstatic! "Children hurry quickly this is our last chance quickly come on!" My children and I rushed to the lifeboat, and screamed at the man operating, nervously needing this opportunity of survival. I did not even have to utter a word to him; he could clearly see our situation and placed us safely onto the life saving boat, all six of us. It was at this point I knew my husband may have not made it, I broke into an enormous amount of tears, mixed with happiness that I had brought my children to safety, yet still with a heart broken and cheated feeling, my husband was no more. And all we could do was watch everything we ever had fade away into the deepness of the Atlantic Ocean. Second after second felt like day after day, the freezing atmosphere of the near to zero degrees waters mixed with the near to zero degrees cold air mixed with the situation created an unthinkable disaster. People were splashing about as if they were being drowned by one another, parts of the ship being demolished by fate and dropping from the vertically sinking R.M.S Titanic, it was unbearable. I had to feel for my children and look towards them; it was no use thinking of what could have been. It was my children and I that were one of the few exceptionally fortunate survivors and I kept telling myself that is what I had to accomplish, looking to the future with my children and I, forever. By Chris Messina ?? ?? ?? ?? Chris Messina Original Writing - Essay ...read more.