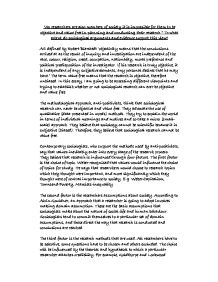 &quot;As researchers are also members of society it is impossible for them to be objective and value free in planning and conducting their research.&quot; To what extent do sociological arguments and evidence support this view?

"As researchers are also members of society it is impossible for them to be objective and value free in planning and conducting their research." To what extent do sociological arguments and evidence support this view? AS defined by Robert Bierstedt 'objectivity means that the conclusions arrived at as the result of inquiry and investigation are independent of the race, colour, religion, creed, occupation, nationality, moral preference and political predisposition of the investigator. If his research is truly objective, it is independent of any subjective elements, any personal desires that he may have.' The term value free means that the research is objective, therefore unbiased. In this essay, I am going to be assessing different viewpoints and trying to establish whether or not sociological research can ever be objective and value free. The methodological approach, anti-positivists, think that sociological research can never be objective and value free. They advocate the use of qualitative (data presented in words) methods. They try to explain the world in terms of individual meanings and motives and so take a micro (small-scale) approach. They believe that sociology cannot be scientific because it is subjective (biased). Therefore, they believe that sociological research cannot be value free. Contemporary sociologists, who support the methods used by anti-positivists, say that values inevitably enter into every stage of the research process. ...read more.

and take a macro (large) approach and so study large groups of people at a time. They believe that their scientific approach is objective (unbiased). Functionalists such as Comte and Durkheim use the methodology of positivists. They argue that objectivity is obtainable using scientific methodology. However, they have been accused of holding politically conservative views for assuming that existing social institutions serve a useful purpose. Another perspective, Marxism, also believe that sociology is objective and scientific. However, Marx carried out no research and so had no empirical evidence to back up his claims. He has been criticised in that few would claim that his sociology was free from his political and moral beliefs. Weber, a Symbolic Interactionist, recognised that values would influence the choice of topics for study. Researchers would choose to research topics that had relevance to society at the time. This approach appears more value free than that of Functionalists and Marxists, but there is some doubt that his personal values influenced his research. His writings on Bureaucracy are strongly influenced by his fear that bureaucratic organisations would stifle human freedom. Most agree that it is impossible for sociology to be value free. Recently, sociological views have changed, and the questions now really is 'should Sociology be value free?' ...read more.

The sixth feature is allowing women to reclaim their history from its appropriation by men. The final feature is collectivising experience, here, women must join together and cooperate in their struggle for liberation. However, even if these problems are solved, the strong thesis still advocates the exact opposite of value freedom and thinks that it can never exist. Some Feminists think that you can only experience something if you've been through it yourself. Feminists criticise other researchers for imposing their own values and beliefs on to their research. This makes the research subjective (biased) therefore it cannot be value free. In summary, anti-positivists such as Weber and Interpretivists believe that sociological research can be influenced by the researchers choice of topic, the researchers assumptions about society, the research methods that are used and how the data are interpreted. They believe that values influence the whole research process and this is highly subjective and so cannot be value free. Positivists believe that sociology can be value free due to the scientific approach that they advocate. In conclusion, some sociologists have tried to rectify the problem of value freedom within sociological research and have offered a solution with the formulation of a new question 'should sociology be value free?' However, Post modernists would criticise these people, as they believe that there is no such thing as validity (truth) so, in their view, value freedom cannot exist at all. ...read more.