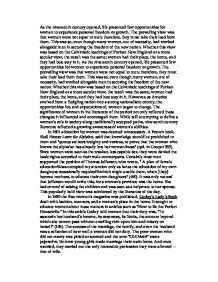 Harry's and mine were commencing: we were sophomores in college. She was a young lady in society: yet she had . . . quite a good mind, and was fully as capable of going thorough our college courses with us . . . .However, with her the next question was, Whom will she marry?" (508) Although many women now received some form of education, most were not expected to utilize this education outside of marriage. Securing a mate, one that could provide for her, was still the primary ambition for most women. Another concern, that of women toiling to support themselves, was addressed by Louisa May Alcott in her book, Little Women. Set during the Civil War, the portrayal of the female characters struggling to hold their family together, when men go to war, accurately reflected the lives of many women adapting to independence. In the very beginning of this book, Alcott reveals one daughter's desire to put her talents to use in more than "womanly" ways. In this dialogue, she shows clearly how restrictive the roles for women still were. Jo says, " It's bad enough to be a girl1/4I can't get over my disappointment in not being a boy; and it's worse than ever now, for I'm dying to go and fight with papa, and I can only stay at home and knit, like a poky old woman!" (6). This story found a receptive audience with female readers, who clearly identified with the March sisters. Of all the female writers in the romantic period, perhaps Emily Dickinson was the most talented. Unfortunately little of her poetry was published in her lifetime, so Dickinson herself never realized the impact she would have. She is perhaps the best example of the paradox presented by women of this period. Reclusive and shy, she was well educated, yet she deferred to the opinion of a man regarding her poetry. ...read more.

I've done my duty by you forty year, an' I'm goin' to do it now; but I'm goin' to live here" (265). With that she invited him in for a dinner. The husband, speechless, is now the one to meekly do as she requests. Freeman's writing appears to fulfill the words of Margaret Fuller: "Another sign of the times is furnished by the triumphs of female authorship. These have been great and are greatly increasing. Women have taken possession of so many provinces for which men had pronounced them unfit, that, . . . it is difficult to say just where they must stop" (316). The schism that began at mid century, widening the gulf between expectations and reality, was beginning to close. Because writers dared to expose the consequences of societal restrictions on women, attitudes began to change. Some states gave women the right to vote; some women pursued careers. There were new opportunities for personal expression and women were eager to be heard. Many agreed with Anna Julia Haywood Cooper, who wrote in Higher Education for Women: It is fair to demand from them for the twentieth century a higher type of civilization than any attained in the nineteenth. Religion, science, art, economics, have all needed the feminine flavor; and literature, the expression of what is permanent and best in all of these may be gauged at any time to measure the strength of the feminine ingredient. (325) Born as a slave in 1858, Cooper graduated from Oberlin College in 1881. She worked as a teacher and in 1892 she helped to organize the Colored Women's League in Washington D.C, She was an example of the new opportunities for women. Her achievements could never have occurred in the first decade of the nineteenth century, but by its last decade there was a shift in the thought process of most Americans. Literature had contributed greatly in the establishment of this new paradigm. A woman's place was no longer restricted to the home. She now had choices: there was hope for the future. ...read more.