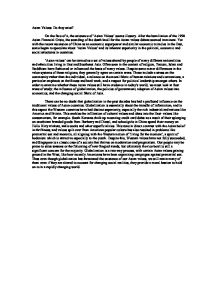 Asian Values: Do they exist

Asian Values: Do they exist? On the face of it, the existence of 'Asian Values' seems illusory. After the humiliation of the 1998 Asian Financial Crisis, the sounding of the death knell for the Asian-values debate seemed imminent. Yet with the recent ascension of China as an economic superpower and similar economic miracles in the East, some began to speculate about 'Asian Values' and its inherent superiority in the political, economic and social structures in countries. 'Asian values' can be termed as a set of values shared by people of many different nationalities and ethnicities living in East and Southeast Asia. ...read more.

In order to examine whether these Asian values still have credence in today's world, we must look at four areas of study: the influence of globalization, the policies of government, adoption of Asian values into economics, and the changing social fabric of Asia. There can be no doubt that globalization in the past decades has had a profound influence on the traditional values of Asian countries. Globalization is essentially about the transfer of information, and in this aspect the Western countries have had distinct superiority, especially the rich industrialized nations like America and Britain. This enables the infiltration of cultural values and ideas into the East- values like consumerism, for example. ...read more.

Despite this, Western values have not fully succeeded, and Singapore is a classic case of a society that thrives on moderation and pragmatism. Our people may be prone to sales seasons or the following of new-fangled trends, but ultimately the rice bowl is still a significant concern for the majority. Globalization is a two way process, with certain Asian values gaining ground in the West, like how recently Americans have been organizing campaigns against premarital sex. Thus even though globalization has threatened the existence of our Asian values, we still retain many of them even if they are altered to account for changing social realities, they provide a moral bastion to hold on to in a rapidly changing world. ...read more.