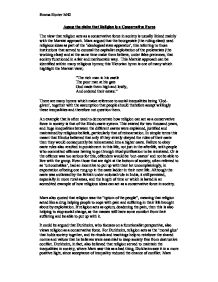 Assess the claim that Religion is a Conservative Force

Assess the claim that Religion is a Conservative Force The view that religion acts as a conservative force in society is usually linked mainly with the Marxist approach. Marx argued that the bourgeoisie (the ruling class) used religious ideas as part of the 'ideological state apparatus', this referring to those institutions that served to conceal the capitalist exploitation of the proletariats (the working class) and at the same time make them believe, under false pretences, that society functioned in a fair and meritocratic way. This Marxist approach can be identified within many religious hymns; this Victorian hymn is one of many which highlight the Marxist view; "The rich man in his castle The poor man at his gate God made them high and lowly, And ordered their estate." There are many hymns which make reference to social inequalities being 'God-given', together with the assumption that people should therefore accept willingly these inequalities and therefore not question them. An example that is often used to demonstrate how religion can act as a conservative force in society is that of the Hindu caste system. ...read more.

Marx also quoted that religion was the "opium of the people", meaning that religion acted like a drug helping people to cope with pain and suffering in their life brought about by exploitation. If religion acts as opium, deadening the pain, then this is also helping to stop social change, as the masses will have some comfort from their suffering and be able to put up with it. It could be argued that Durkheim, who focuses on a functionalist perspective, also views religion as a conservative force. For Durkheim, religion acts as the 'moral glue' that holds society together, and its rituals and teachings help to reinforce the shared norms and values that he believes were essential to keep society free from destructive conflict. Durkheim, in fact, also believed that religion served to maintain the inequalities in society, where Marx saw this as a bad thing, Durkheim saw it in a more positive light, since acceptance of inequality reduced the chance of conflict. ...read more.

An example of religion wishing to bring about social change is the radical Islamic movement, the Nation of Islam, which was closely associated with the civil rights movement in America. Followers were taught that they should reclaim Islam as their cultural birthright and take their rightful place in society, and should resist being treated as slaved and 'second class citizens'. The aim of the Nation of Islam is black segregation, with followers lining in their own self-sufficient society, with a strict moral code. Finally, the 'liberation theology' of South America, where radical Roman Catholic Protestants and nuns taught that it was the people's duty to rise up against oppression, is a further example to show that religious ideas can be associated with social change. In conclusion, the evidence suggests that in many cases religion does act as a conservative force in society, helping to maintain the status quo and prevent change, particularly revolutionary social change. However other evidence suggests that there is nothing 'inevitable' about this process, and that religious ideas can also be associated with a move for social change. ?? ?? ?? ?? Emma Hunter M42 ...read more.