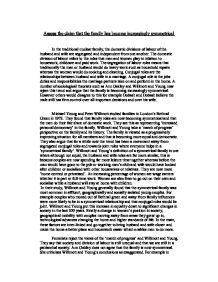 Assess the claim that the family has become increasingly symmetrical In the traditional nuclear family, the domestic divisions of labour of the husband and wife are segregated and independent from one another. The domestic division of labour refers to the roles that men and women play in relation to housework, childcare and paid work. The segregation of labour roles means that traditionally the man or husband would do heavy work such as household repairs whereas the woman would do cooking and cleaning. Conjugal roles are the relationships between husband and wife in a marriage. A conjugal role is the jobs duties and responsibilities the marriage partners take on and perform in the home. A number of sociological theorists such as Ann Oakley and Willmott and Young now reject this trend and argue that the family is becoming increasingly symmetrical. However others would disagree to this for example Dobash and Dobash believe the male still has firm control over all important decisions and over his wife. Michael Young and Peter Willmott studied families in London's Bethnal Green in 1973. They found that family roles are now becoming symmetrical and that the men do their fair share of domestic work. They see this as representing 'increased personal democracy' in the family. Willmott and Young take a 'march of progress' perspective on the family and its history. ...read more.

Oakley did her research and concluded that although there was evidence of men helping, there was no clue as to a trend towards symmetry. Oakley also found that husbands were more likely to help in childcare than anything else but only certain enjoyable aspects of it. Worryingly, the father's role was defined by couples as being able to 'take an interest' and that a good father would play with the kids in the evenings and 'take them off her hands' on a Sunday morning. This meant that mothers lost the rewards of childcare and had time only for more housework. So instead of seeing Willmott and Young's 'march of progress' Oakley sees the housewife role as becoming the dominant role for married women. Even though the 20th century saw an increase in the number of married women at work the housewife is still a primary female role. Working women are also mainly concentrated in low-paid jobs which are an extension of a housewife's role e.g. nursing and childcare. Sociologists Duncombe and Marsden agree with the feminist view that the division of labour is unequal and that society is still patriarchal. They interviewed 40 couples who had all been married for at least 15 years and came up with the 'Triple Shift' theory. In their interviews, Duncombe and Marsden found that not only do housewives do most of the housework as well as paid work but they also do 'emotional work'. ...read more.

Despite this some chores such as washing and ironing were done by women. Also, the numbers of households in which men are mainly responsible still form a small minority. However damning or conclusive any study is, it can always be criticised and have flaws. Firstly Ann Oakley's study was not widespread enough as only 40 people and they were only women. Duncombe and Marsden did the same thing and only used a small sample size but interviewed both partners instead of just women. Pahl's study was more reliable as she interviewed 102 couples both alone and together but it was too specific and looked only at financial aspects. The cases both for and against in this argument have weight but also have their weaknesses. Some studies were too exclusive and did not look at their subjects in relation to the rest of society. Therefore on the whole the evidence points to one of two things, either that yes there has been some movement towards equality in recent years with some conjugal roles becoming joint and men doing more work at home or that women are still some distance from the type of equality that men enjoy and they are still forced to take more responsibility for housework and as always have less influence in the family then their husbands. Finally, even where there are signs of equality such as the woman having a good wage and a full time job, changes in the family have been limited and therefore the family is not presently symmetrical. ...read more.

Overall the essay needs more post-modern evidence and also needs to consider family structure in other societies other than Britain.