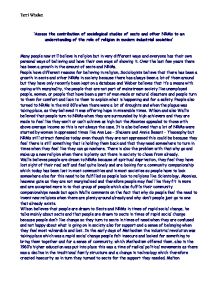 'Assess the contribution of sociological studies of sects and other NRMs to an understanding of the role of religion in modern industrial societies' Many people now still believe in religion but in very different ways and everyone has their own personal ways of believing and have their own ways of showing it. Over the last few years there has been a growth in the amount of sects and NRMs. People have different reasons for believing in religion, Sociologists believe that there has been a growth in sects and other NRMs in society because there has always been a lot of them around but they have only recently been kept on a database and Weber believes that it's a means with coping with marginality, the people that are not part of mainstream society like unemployed people, women, or people that have been a part of man made or natural disasters and people turn to them for comfort and look to them to explain what is happening and for a safety. People also turned to NRMs in the mid 80's when there were a lot of droughts and when the plague was taking place, as they believed it was offering hope in miserable times. Wilson and also Wallis believed that people turn to NRMs when they are surrounded by high achievers and they are made to feel like they won't or can't achieve as high but the Moonies appealed to those with above average income so this is not always the case. ...read more.

education was put into place this was a time of radical political movements as there was a decline in the traditional family structure and a change in technology which therefore created insecurity so in turn they turned to sects for the support they needed. Melton disagreed with this he said that there were far more sects in the 1050's and 70's than in the 60's so its not true that people turn to sects in times of rapid social change but you could also argue that people don't turn to them immediately and take there time so that could be why there was a large number in the 70's. There is also the fact of why not turn to traditional religions those are already there. Wallis put forward the idea that there was dissatisfaction with existing religions as he believes people feel they are to remote and you don't get a sense of belonging, he also feels people feel remote from modern life and prefer to turn to an organisation, he also says that people feel the traditional religions are more interested in making the buildings look good than looking after their congregation which therefore makes it feel as if there is no community spirit and you don't get any support in times of need. Bruce believes that people are more likely to turn to Sects and NRMs as a response to pluralism, he believes that if there are several different ...read more.

are not in tune with modern life and feel there is too much freedom and choice in other religions which makes them feel insure, the crumbling cage (fundamentalism) opposed to iron cage (NAM) both have grown in the last 30 years this suggests that less people are turning to traditional religions for security etc, but there are different explanations for different groups of people. Overall I think that in modern day society sect and NRMs are becoming more popular and relevant as people are going against the traditional religions as they have to many set ways of belief and they don't allow people to have a freedom of choice in what they believe whereas sects and NRMs allow people to have more choice and allow them to believe how they want to believe. It doesn't help that the traditional religions are not keeping up with modern times, they don't accept things that are now totally acceptable in society which is then making people leave as they feel that the rules of the traditional religions are too old fashioned. People also turn to religion to fulfil their basic needs, because there has been a lack of sense of community nowadays people turn to religion for the sense of belonging and so they feel as if they are apart of something and are here for a reason and have the social support there if they need it. ?? ?? ?? ?? Terri Whelan ...read more.