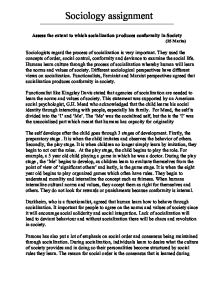 Assess the extent to which socialization produces conformity in Society

Durkheim, who is a functionalist, agreed that human learn how to behave through socialization. It important for people to agree on the norms and values of society since it will encourage social solidarity and social integration. Lack of socialization will lead to deviant behaviour and without socialization there will be chaos and revolution in society. Parsons has also put a lot of emphasis on social order and consensus being maintained through socialization. During socialization, individuals learn to desire what the culture of society provides and in doing so their personalities become structured by social rules they learn. The reason for social order is the consensus that is learned during socialization. Shared norms and values provide the basis for social order. In Industrial society, agencies like police and the military would play an important role controlling behaviour. Marxist analyse the agencies of socialization in capitalist society is not just family, but, mass media, school and political institution. ...read more.

If the individual do not reject the negative label, the label will become his 'master status' and consequently a self-fulfilling prophecy will take place whereby the negative prediction given to him become true. Therefore for the interactionist, it is not necessarily determine how an individual would behave since behaviour can change through interaction. In post modernist, consensus are no longer exist, cultural frameworks have fragmented and individual identifies are far more diverse. For structuration, social order and social structure cannot exist independently at each other. People can only make choices within social framework. For example, laws. Laws constraint what people can do and cannot do. But can people can change laws to by making or replacing old laws with new laws. Like for example, cohabitation would have been regarded as highly deviant in western societies in the middle of 20th century but, today it is no longer regarded as deviant. In conclusion, Humans are not really control by society. Human has not much freedom. ...read more.