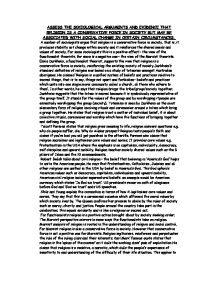 ASSESS THE SOCIOLOGICAL ARGUMENTS AND EVIDENCE THAT RELIGION IS A CONSERVATIVE FORCE IN SOCIETY BUT MAY BE ASSOCIATED WITH SOCIAL CHANGE IN CERTAIN CIRCUMSTANCES.

ASSESS THE SOCIOLOGICAL ARGUMENTS AND EVIDENCE THAT RELIGION IS A CONSERVATIVE FORCE IN SOCIETY BUT MAY BE ASSOCIATED WITH SOCIAL CHANGE IN CERTAIN CIRCUMSTANCES. A number of sociologists argue that religion is a conservative force in society, that is, it produces stability not change within society and it reinforces the shared needs and values of society. For some sociologists this is a positive effect - the view of the functionalist theorists, for some is a negative one - the view of the Marxist theorists. Emile Durkheim, a functionalist theorist, supports the view that religion is a conservative force in society, reinforcing the existing society of society. Durkheim's standard definition of religion was based on a study of totemism amongst Australian aborigines. He claimed 'Religion is a unified system of beliefs and practices relative to sacred things, that is to say, things set apart and forbidden - beliefs and practices which unite into one single moral community called a church, all those who adhere to them'. In other words, he says that religion brings the tribe/group/society together. Durkheim suggests that the totem is sacred because it is symbolically representative of the group itself. It stands for the values of the group and by worshipping it people are essentially worshipping the group (society). ...read more.

It also serves to help owners of production rationalise and justify their position of power and privilege. Religion under these circumstances appears to take on the character of an ideology. Such an ideology justifies and legitimises an unjust social order in such a way as to make it seem inevitable, pre-ordained and unchangeable. Religion promises some form of salvation or reward in some other life conditional upon complete acceptance of condition in this life, one's place in it and the appointed places of other. Another perspective on religion is the feminist one. Feminists argue that religion is a conservative force in society and prevents social change, allowing the ongoing dominance of the patriarchy and of male ideology within society, thus preventing women from fully achieving equal rights. This is not a desirable effect for feminists who say that women will not be equal while religion plays an important part in society as it promotes the male dominated existing social order. However other sociologists argue that religion is a radical force in society, causing conflict, a lack of stability and change within the society which it is in operation in. Weber argues that religion is a radical force in society - a force for change. ...read more.

Madurron argues that most religions tend to take a traditional and conservative line but some churches have undergone significant internal reorganization which may fuel social change in wider society. For example, the hierarchy of most religions tends to be recruited from elite groups. However, when clergy are recruited from the subordinated class, conflict between bishops and clergy can lead to the emergence of a more radical religion. This seems to have been the case in relation to liberation theology in Latin America. It grew out of discontent with the first world idea that third world poverty could be ended by aid from wealthier nations. Liberation ideology is religious beliefs that the poor themselves should end their own impoverishment. The Vatican was concerned that Liberation theology analyses the condition of the poor in Marxist terms e.g. Father Comilo Torres, a Roman Catholic priest who encourages the Columbian poor to join in a revolution to change the conditions. In conclusion, although the likes of Durkheim and Marx provide very good evidence of how Religion may act as a Conservative force, once you consider modern examples such as Islamic Fundamentalism and the apparent process of secularisation it seems that religion is maintaining nothing like Durkheim and Marx described. If Religion is maintaining anything then it seems to be conflict, can this be viewed as part of the conservative force? ...read more.