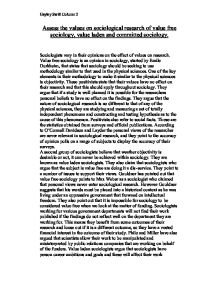 Assess the values on sociological research of value free sociology, value laden and committed sociology. Sociologists vary in their opinions on the effect of values on research. Value free sociology is an opinion in sociology, started by Emile Durkheim, that states that sociology should be seeking to use methodology similar to that used in the physical sciences. One of the key elements in their methodology to make it similar to the physical sciences is objectivity. These positivists state that their values have no effect on their research and that this should apply throughout sociology. They argue that if a study is well planned it is possible for the researchers personal beliefs to have no effect on the findings. They argue that the nature of sociological research is no different to that of any of the physical sciences, they are studying and measuring a set of totally independent phenomena and constructing and testing hypothesis as to the cause of this phenomenon. Positivists also refer to social facts. ...read more.

They also point out that it is impossible for sociology to be considered value free when we look at the matter of funding. Sociologists working for various government departments will not find their work published if the findings do not reflect well on the department they are working for. This means they benefit from some outcomes of their research and loose out if it is a different outcome, so they have a vested financial interest in the outcome of their study. Philo and Miller have also argued that scientists allow their work to be manipulated and misinterpreted by public relations companies that are working on behalf of the funders. Value laden sociologists argue that sociologists have person career ambitions and goals and these will affect their work whether they realise it or not. Postmodernist's sociologists such as Lyotard argue that the process of sociological and scientific thinking is based upon a series of values about the nature of society. ...read more.

He claimed sociology should attempt to study the real powerful people, those who create the rules of society. Marxists argue that the purpose of sociology is to expose the ways in which to ruling class exploit the working masses. They hope to breakdown the ways in which capitalism operates only operates to benefit a few. Marxist criminology writers Walton, Taylor and young argued that radical criminological strategy is too expose the law as the biggest instrument of the ruling class. Feminist writers are also big supporters of the committed sociology stance in this argument. Writers such as spender would agree with the Marxists on the principal of exposing the workings of an oppressive society, but they suggest they key is to explore how males dominate and oppress in society. The aim is to expose the truth about men, thus freeing women from the oppression of patriarchy. Feminist writers obviously place enormous importance on values influencing work, as their values mean they must fight against the oppression of patriarchy and they try to expose its effect and encourage enlightenment through their research. Hayley Swift Column 2 ...read more.

Although this essay is somewhat well structured, crucial elements of a good construction are absent. It lacks an introduction Ã¢â‚¬â€œ simply a sentence or two defining the what the three concepts mentioned in the question actually are would show that ...

Although this essay is somewhat well structured, crucial elements of a good construction are absent. It lacks an introduction Ã¢â‚¬â€œ simply a sentence or two defining the what the three concepts mentioned in the question actually are would show that that the candidate is methodical, and that they can effectively introduce their essayÃ¢â‚¬â„¢s main points to be discussed before proceeding to the main bulk of the essay itself. It also lacks a conclusion, which would show that the candidate can successfully weigh up aforementioned arguments. For these reasons I feel the grade should be average - so it is not actually that the candidate lacks the sociological knowledge to do better. They do answer the question set, as they do refer to the three concepts and explain them at some stage. Overall I just feel that parts of the essay are missing, which makes it seem as if it lacks academic professionalism.

The main sociologists/sociological groups are sufficiently referred to in this essay: Weber, feminists, Marxists and Positivists. Specific sociologists are mentioned, such as Gouldner, which suggest the candidate has a detailed understanding in the field. Generic sociological terminology, Ã¢â‚¬Å“oppressiveÃ¢â‚¬Â is used as well as scientific terminology, Ã¢â‚¬Å“hypothesisÃ¢â‚¬Â which shows that the candidate can successfully weave broad sociological ideas with their scientific approaches to studying society. Some candidates struggle to do this, so the fact that the writer does consistently does this is notable. But I feel that actual studies could be explained to provide empirical evidence, as the writer could be accused of simply Ã¢â‚¬Å“name-droppingÃ¢â‚¬Â. For example I would give details of DurkheimÃ¢â‚¬â„¢s Postivist approach/findings to the study of suicide in terms of social facts, rather than just stating: Ã¢â‚¬Å“Postivists refer to social factsÃ¢â‚¬Â. This would show and crystallise the candidateÃ¢â‚¬â„¢s academic knowledge.

Spelling is accurate; however there are some grammatical mistakes. Names of sociologists require capitalisation, for example Ã¢â‚¬Å“spenderÃ¢â‚¬Â and Ã¢â‚¬Å“youngÃ¢â‚¬Â, and Ã¢â‚¬Å“PostmodernistÃ¢â‚¬â„¢s sociologistsÃ¢â‚¬Â should be Ã¢â‚¬Å“Postmodernist sociologistsÃ¢â‚¬Â so the quality of written Standard English could be significantly improved. The wrong word is used occasionally, for example it should be Ã¢â‚¬Å“whetherÃ¢â‚¬Â in the following sentence: Ã¢â‚¬Å“A second group of sociologists believe that weather objectivity is desirable or notÃ¢â‚¬Â¦Ã¢â‚¬Â By improving the essay grammatically I feel this would increase the essayÃ¢â‚¬â„¢s overall professionalism, sophistication and coherence.