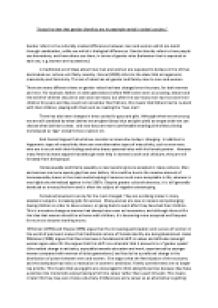 Assess the view that gender identities are increasingly varied in todays society.

﻿?Asses the view that gender identities are increasingly varied in today?s society.? Gender refers to the culturally created differences between men and women which are learnt through canalization, unlike sex which is biological differences. Gender identity refers to how people see themselves, and how others see them, in terms of gender roles (behaviour that is expected to each sex, e.g, women are housewives.) A traditional set of ideas about how men and women are supposed to behave in the UK has dominated our culture until fairly recently. Connel (2002) refers to the ideas that as hegemonic masculinity and femininity. This set of ideas has set gender and family roles to men and women. There are many different views on gender roles that have changed over the years, for both women and men. For example, fathers in older generations before WW1 were seen as uncaring, distant and the belief of children should be seen and not heard, but after the war many men had not seen their children for years and ...read more.

Homosexuality and Metro sexuality is now becoming more accepted in many cultures. Men and women are more openly gay than ever before, this could be due to the massive amount of homosexuality shown in the mass media helping it become much more acceptable in life, whereas is was highly decriminalized against in the 1960?s. Despite greater cultural tolerance, it is still generally devalued as a masculine form and is often the subject of negative stereotyping. Female achievements are by far the most changed. They are outdoing males in many academic subjects. Increasing jobs for women. Many women are now in careers and prolonging having children in order to have a career, or going back to work after they have had their children. This is a massive change as women had always been seen as housewives, and although there still is the idea that women should be at home with children, it is becoming more accepted and frequent for mums to become working mums. ...read more.

Increasing economic independence means that women are now viewed as significant consumers. Women are more likely to see consumption and leisure as key factors in their identity. Such processes have supposedly led to subcultures such as ?ladettes?, who are increasingly adopting male forms of behaviour, excessive drinking and smoking etc. There has even been a massive change in what we perceive to be ?model material?, in a negative way. Sexual icons such as Marylin Monroe, have now been changed to fakely thin models. Hunt (2001) argues that the media recognize society?s obsession with looking slim and perpetuate the idea that slimness equals success, health, happiness and popularity. This is in the media constantly, having an effect not only on women, but males. With more men becoming metrosexual . In conclusion, I do believe that gender identities have become more varied in society. There are so many things that have changed in the last 50 years positively and negatively. People are now comfortable with wearing and acting how they want, with transsexuals and tomboys which would have not been acceptable not that long ago. ...read more.