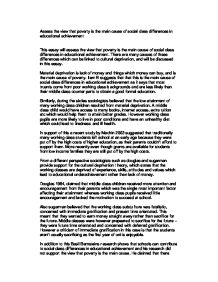 Douglas 1964, claimed that middle class children received more attention and encouragement from their parents which was the single most important factor affecting their attainment whereas working class pupils received little encouragement and lacked the motivation to succeed at school. Also sugarman believed that the working class subculture was fatalistic, concerned with immediate gratification and present time orientated. This meant that they wanted to earn money straight away rather than sacrifice for the future. Middle classes were however prepeared to sacrifice for the future-they were future time orientated and concerned with deferred gratification. However a criticism of immediate gratification in this case is that the students aren't usually sacrificing as the first year of uni is enjoyable. ...read more.

Education is based arounf middle class values and therefore certain knowledge is privileged. As their culture is closer to that of the school they are more likely to succeed. A similar view is expresses by diane reay who studied social capital and concluded that it is mothers who have the main influence on their childs education. This is because middle class mothers have more cultural capital and material capital- they have more qualifications and information about how the educational system worked. In conclusion there are many causes of social class differences in educational achievement and poverty is one of them. It is important because material capital ie books etc can be converted into high qualifications. However cultural capital may have more of a significance because middle classes naturally have more cultural capital which can be converted into high salaries etc. ?? ?? ?? ?? ...read more.