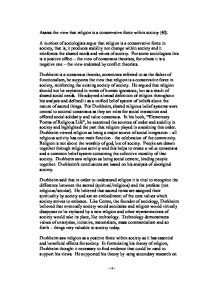 Assess the view that religion is a conservative force within society (40).

Assess the view that religion is a conservative force within society (40). A number of sociologists argue that religion is a conservative force in society, that is, it produces stability not change within society and it reinforces the shared needs and values of society. For some sociologists this is a positive effect - the view of consensus theorists, for others it is a negative one - the view endorsed by conflict theorists. Durkheim is a consensus theorist, sometimes referred to as the father of functionalism, he supports the view that religion is a conservative force in society, reinforcing the existing society of society. He argued that religion should not be explained in terms of human ignorance, but as a result of shared social needs. He adopted a broad definition of religion throughout his analysis and defined it as a unified belief system of beliefs about the nature of sacred things. For Durkheim, shared religious belief systems were central to societal consensus as they set rules for social interaction and offered social solidarity and value consensus. In his book, "Elementary Forms of Religious Life", he examined the sources of order and stability in society and highlighted the part that religion played in sustaining this order. ...read more.

Religion emphasised the existence of an afterlife of eternal bliss - thus giving the oppressed something to look forward to - they felt that their treatment and the injustice against them would not matter when they died and went to heaven, and therefore they did not feel it necessary to rebel or disrupt the existing system as it was not encouraged by religion. Religion made a virtue out of the suffering produced by oppression, a virtue which made their present situation of poverty more tolerable as they knew they would be rewarded in the afterlife. Religion made the present more acceptable as it gave hope of supernatural intervention in the future when the problems on earth would be sorted out by God - the oppressed waited for this to happen instead of rebelling and overturning the system current at that time. The existing social order and hierarchy was justified as religion explained that it was decided by God. The oppressed accepted this philosophically as they believed there was nothing that they could do about it. Religion made the proletariats unsatisfactory lives bearable a it gave them hope in the future (in the form of an afterlife) ...read more.

on society as it helped capitalism to start off. Neo-Marxists dispute Carl Marx's original position and agree with Weber in saying that religion can produce social change. It is believed that Engels was the first to recognize that religion may be a vehicle of social change. This is demonstrated through looking back in time when early Christian sects resisted Roman rule - this shows that religion could be a source of resistance. A more recent account of the potential revolutionary force of religion is demonstrated in the following claim of the neo-Marxist Otto Manduro; Religion is not necessarily a functional, reproductive or conservative factor in society. It is often one of the main and sometimes the only available channel to bring about a social revolution. This claim is demonstrated by looking at; the Nationalist and Loyalist Catholics and Protestants in Northern Ireland, and the 1979 revolution in Iran when the Iranian royal family was deposed and Iran was turned into a strict Islamic fundamentalist state. It can be said that religion is a key agent of socialisation, that is, although it may cause a certain amount of change its primary effect on society is one of stability and cohesion. There are more cases of religion being a conservative force in society than there are of it being a radical one. - 1 - ...read more.

The writer provides a good introduction, explaining consensus and conflict theories which are essential to understand in order to answer the question. It is correctly structured because it provides the Functionalist Durkheim’s views that religion is indeed a conservative force ...

The writer provides a good introduction, explaining consensus and conflict theories which are essential to understand in order to answer the question. It is correctly structured because it provides the Functionalist Durkheim’s views that religion is indeed a conservative force (which the question asks for) and then continues to discuss theories of Marxism, Feminism, Calvinism and Neo-Marxism - so it addresses religion as a radical force also, therefore gaining lots of evaluative marks. This essay is well concluded, “There are more cases of religion being a conservative force in society than there are of it being a radical one” because the writer provides a final assessment of the question, coming to answer after considering both sides throughout. Overall this is already very impressive at GCSE level!

Key terms are used correctly, “the elect”, “socialisation”, “revolutionary force” and are explained correctly, “...and the profane (not religious/secular)” which demonstrates sociological understanding. As this is essentially a purely theoretical question, the candidate does well to mention as many theories and theorists as possible, such as Durkheim’s “analysis of aboriginal society”. Usually Calvinism, Marxism and Neo-Marxism are poorly understood at GCSE so this essay is rather superior to lots I have seen – this candidate clearly knows them all inside out as they write a wealth of information about each one.
Different areas of the globe are discussed; “North of Europe” “Northern Island”, “Iran” which is refreshing because it shows that religion may be a conservative force in some countries but not others. Candidates tend to completely focus on the UK in Sociology, which decreases the amount of marks to potentially be awarded as sociology is the study of all different societies around the world.

The writer has spelled the names of some key theorists wrong; it should be “Karl Marx” not “Carl Marx”, and “Otto Maduro” not “Otto Manduro”. Nonetheless these few mistakes would not lessen the overall high marks this essay would be sure to receive – it is very impressive at GCSE level and, to be honest, is just as good as lots of A Level essays I have seen. The quality of writing is quite good because the candidate uses a variety of punctuation, for example quotation marks and brackets, and also doesn’t make any major grammatical errors.