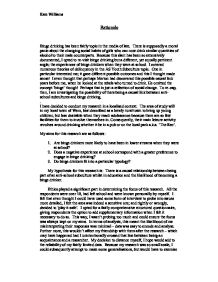 Being part of an anti-school subculture whilst in education and the likelihood of becoming a binge drinker.

Rationale Binge drinking has been fairly topic in the media of late. There is supposedly a moral panic about the changing social habits of girls who can now drink similar quantities of alcohol to their male counterparts. Because this slant has been so extensively documented, I opted to re-visit binge drinking but a different, yet equally pertinent angle; the experiences of binge drinkers when they were at school. I covered numerous theories of delinquency in the AS Youth Subculture topic. One in particular interested me; it gave different possible outcomes and this I thought made sense! I even thought that perhaps Merton had discovered this possible causal link years before me, when he looked at the rebels who turned to drink. ...read more.

Are binge drinkers more likely to have been in lower streams when they were at school? 2. Does a negative experience at school correspond with a greater preference to engage in binge drinking? 3. Do binge drinkers fit into a particular typology? My hypothesis for this research is: There is a causal relationship between being part of an anti-school subculture whilst in education and the likelihood of becoming a binge drinker. Ethics played a significant part in determining the focus of this research. All the respondents were over 18, had left school and were known personally by myself. I felt that even thought I could have used some form of interview to probe into issues more detailed, I felt the area was indeed a sensitive one; and rightly or wrongly, decided to 'play it safe'. ...read more.

Because my research was so small scale, I could subsequently attempt to make some generalisations, but would have to exercise a degree of caution, considering my small sample size that wouldn't necessarily represent other Wemians, yet along another area. My main reason for opting to do a structured questionnaire is that I felt it best suited my ability to research my aims. To make the results that I am going o obtain as valid as they possibly could. I didn't decide to do something such as an interview method as I believed when someone is being interviewed they have the opportunity to withheld all the information. Whereas a questionnaire enables them to be detailed and slightly indepth. However, also enables them to be truthful and comfortable with the information that they are divulging. No of words: 618 ?? ?? ?? ?? Kate Williams ...read more.